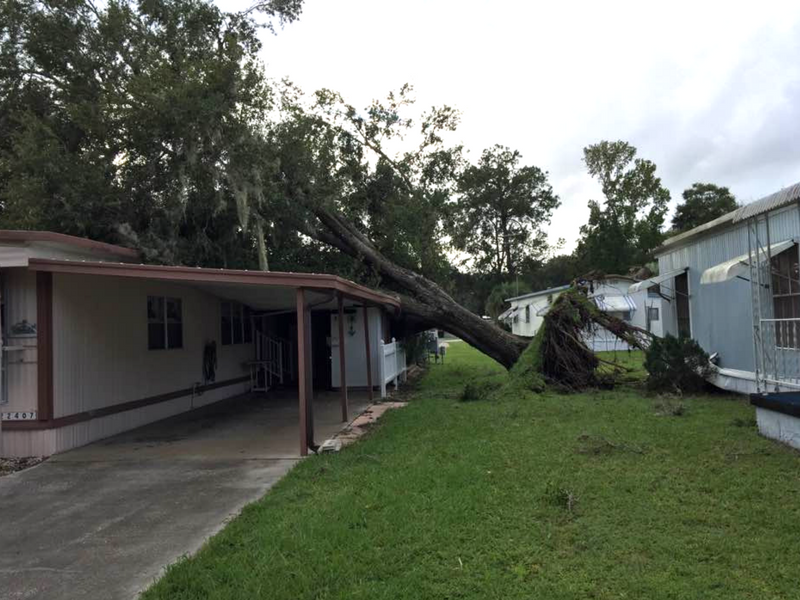 Wesleyan Village, a senior, Christian retirement center in Brooksville, Florida, was in the direct path of Hurricane Irma. Since that time, conversations throughout Wesleyan Village are heard over and over again praising God for his continued protection and mercy because the wind velocity was reduced when Irma visited us. Also apparent was the demonstration of love. The community came together in a new and wonderful way. Neighbors helped neighbors. Added to our praise is the fact that there was no physical injury before, during or after the storm. (One couple was taken to the hospital due to carbon dioxide poisoning and were released the following morning.)

Wesleyan Village consists of mobile homes, traditional “stick built” and cement block homes. The greater damage was concentrated in the older section where most of the mobile homes are located.

Electrical power lines were downed by falling trees which terminated services throughout the village. Two of the greatest areas with discontinued services were to our sewage plant lift stations and loss of food in home freezers. Due to failure of the lift stations, some homes had damage to their interior because of sewage back up.

On Friday, September 22, Wesleyan Village residents came together to corporately express thanks and praise and to pray for the ongoing emotional and financial needs of those sustaining extensive damage. President Don Maness made an extensive report of the Board of Directors meeting.

If pictures can express a situation far better than words (and they do), then living through an event of this nature magnifies even what pictures communicate.

A number of residents on limited or fixed incomes are finding it difficult to cope with their present situations. A “Hurricane Irma Relief Fund” has already begun with residents and friends of the village making donations to assist individuals who sustained damage to their homes and to Wesleyan Village for expenses to re-establish services to all the residents. An appeal for funds is being made to residents and friends for continued donations. Any prayers and financial gifts are appreciated.

Donate to the Brooksville Relief Fund.