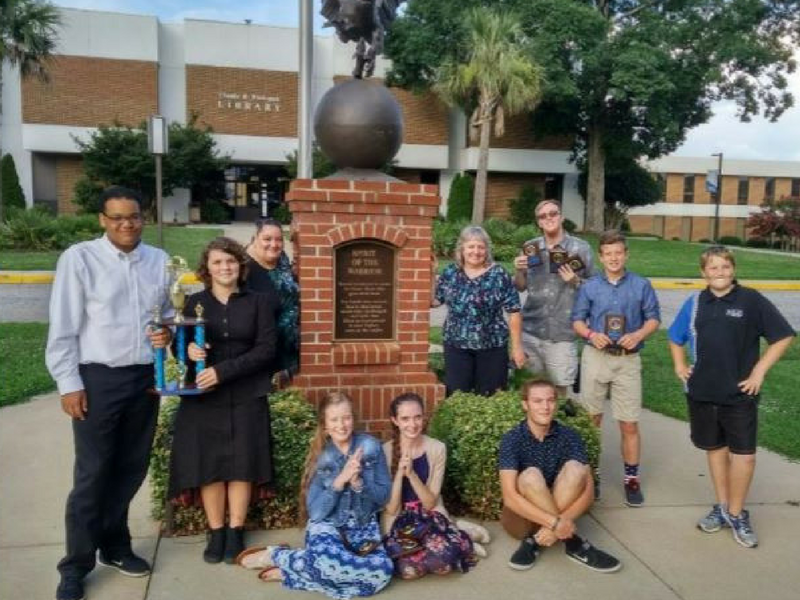 Wesleyan quizzers from across the nation gathered this summer at Southern Wesleyan University for the 2017 National Wesleyan Bible Bowl (WBB) Tournament.

Teams from Wesleyan churches in Oklahoma, Virginia, Pennsylvania, Ohio and Indiana participated, having spent the past year studying the Gospel of Luke in preparation for this competition.

The WBB began with team preliminaries, followed by a final day to determine an overall champion. WBB also emphasized the importance of discipleship and fellowship with daily worship and devotional sessions led by SWU’s student ministry teams.

Members of the winning team included AJ Gano, Lacie Gano, Eric Johnson, Andrea Munroe, Anna Phillips, Joseph Phillips and Nate Skidmore. Each member of the team was awarded a $1,100 scholarship to a Wesleyan college or university in recognition for their efforts. Theresa Lochtefeld and Heather Friesen coached the team. Quizzers were also recognized for their achievements in two separate individual competitions. Scholarships ranged from $3,500 for first place to $250 for tenth place.

The top quizzer in the individual toss-up competition was Nate Skidmore, the senior captain of the team from Cypress, in just his second year of quizzing. He was followed by Grace Deitrick from the Milton team, and Andrea Munroe, also from Cypress.

Quizzers also competed in the written competition, which was based on the combined score of 20 five-question quizzes taken the first two days of the WBB. Top honors in this category went to Andrea Munroe of Cypress, followed by her teammate, Nate Skidmore. Third place was a three-way tie between three individuals from Milton: Abigail Terwilliger, Grace Ann Deitrick and Christopher Reed.

As a way of emphasizing that WBB is about more than the competition, each year two students are recognized for their character, highlighting how Bible quizzing has helped them to grow in their faith. The recipients are nominated by their coaches and submit essays on what quizzing has meant to them. Recipients this year were Mason Yopp of Penn Forest and Nate Skidmore.

“Quizzing has been one of the most challenging yet rewarding and enriching activities I have ever participated in” said Yopp. “I never knew how to effectively study the Word of God, yet quizzing has opened the doors for me to be able to study and apply it to my life.” Yopp has enrolled at Indiana Wesleyan University, where he will prepare for pastoral ministry.

Teams will study Paul’s letter to the Corinthians in the 2017-18 quizzing year and participate in local and regional competitions as they prepare for the next year’s national tournament at Houghton College.

“WBB is all about three goals: discipleship through the study and memorization of God’s Word, fellowship with like-minded Christ-followers and competition that brings glory to God,” said National Director Jim Terwilliger. To get involved, contact him at jim.terwilliger@mcslions.org.