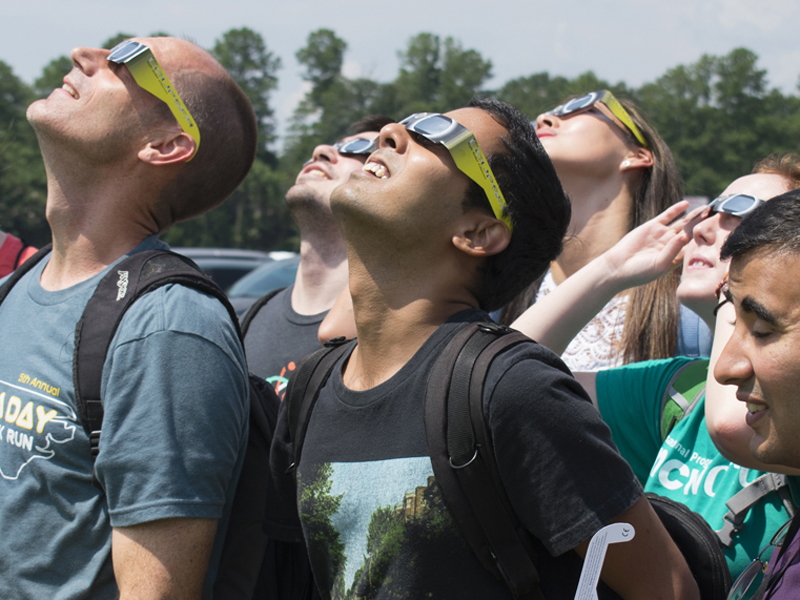 Between 3,000 - 5,000 people gathered at Southern Wesleyan University in South Carolina to view the recent eclipse.

On August 21, Southern Wesleyan University hosted eclipse-viewers from several states and some foreign countries, to witness the first total eclipse to appear anywhere in the continental U.S. since 1979.

Eclipse Over Pickens County was organized by Southern Wesleyan University, Pickens County, the town of Central and many key partners. Event organizers estimate the number of visitors to range between 3,000 and 5,000. The university handed out approximately 4,000 pairs of eclipse glasses and plans to donate the remainder to missions organizations for children overseas who will be in the path of an eclipse in 2019.

According to Dr. Todd Voss, university president, Southern Wesleyan University was listed as one of the few officially approved NASA viewing sites in the country.

To celebrate the eclipse, Joe R. Gilbert Track and Field became a festive atmosphere where kids could enjoy games or cool off under a giant spray of water, courtesy of Central Fire Department. Also on hand were food vendors serving up festival favorites, from BBQ sandwiches to funnel cakes. The SWU Jazz Ensemble and University Singers also performed throughout the program. Roy Costner, Pickens County Council chairman, emceed the event and recognized elected officials, as well as other notable visitors, many of whom attended a VIP reception.

“The university staff did a fantastic job to create a safe, fun environment,” said Sam, who was visiting with his family from New York.

“I was looking along at the line of totality and saw SWU right on the center line, so I did a Google search to see if you guys had anything planned. We liked the fact that we could get a reserved spot in the lot,” said Patrick Brandt, who traveled to SWU’s campus with a couple of van loads of life science Ph.D. students from the University of North Carolina at Chapel Hill.

Jenny Fisler of Harrington, Del., borrowed a welder’s helmet from a friend to view the eclipse. Fisler enjoyed the eclipse alongside her grandson, SWU student, John Ryall, and his mother, Debbie Holden.

Dr. Jo Anne Lyon, ambassador and general superintendent emerita for The Wesleyan Church, was in town for an ordination service the night before, so she decided to delay her return home and view the eclipse at SWU.

Under a giant LED display showing a filtered image of the sun, Dr. Jim Schmutz, retired member of SWU’s science faculty, explained what was happening as the eclipse transitioned through its stages, then an air horn signaled the okay for the crowd to remove their eclipse glasses when totality occurred to safely view the corona encircling the moon’s outline.

“It was an amazing day where friends, family and alums from all over came,” Bryant said. “This could be chalked up to a fantastic special event, compliments of God’s spectacular hand on this campus.”

Mike O’Neal, a 31-year NASA veteran, presented “Spirituality and Spaceflight,” a multimedia presentation at the Newton Hobson Chapel and Fine Arts Center auditorium that gave the story of the role faith has played in the lives and missions of many U.S. astronauts, recalling prayers said by John Glenn and other space pioneers, as well as a scripture reading from the book of Genesis read by the Apollo 8 crew as they looked toward earth from their moon orbit.

Earlier in the day, Prof. Ivy Kaufman gave a lecture on the science behind the unique natural event during a lunch presented by Southern Wesleyan’s Division of Science.

Proceeds from the sale of T-shirts and premium parking spaces were raised to benefit a campaign to completely update the 70-year-old Childs Hall, a historic residence hall. Also, many visitors to Eclipse Over Pickens County donated school supplies for United Way of Pickens County to give to local children in need. 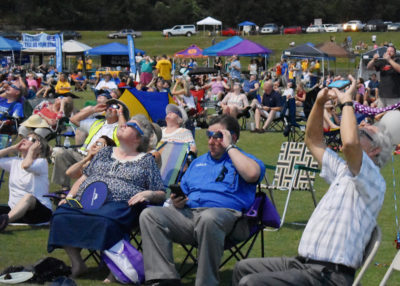 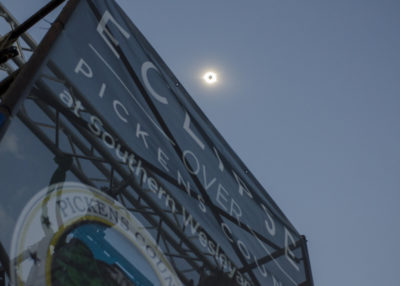