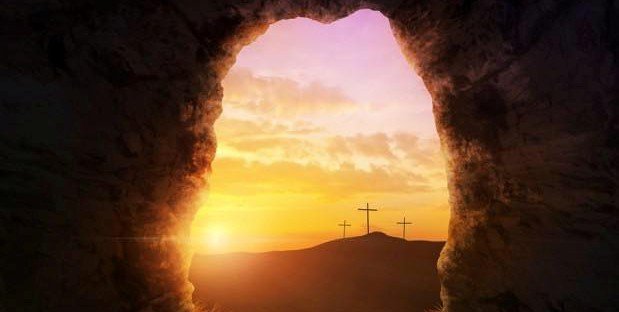 ​He is not here

No matter how you celebrate Easter remember that hope is found in an empty tomb–not in bunnies, chicks, and colored eggs.

Professors have a reputation for being absent-minded. Actually, my experience has been that the students often find their minds are absent when the professor hands out the exams, but the professor’s mind seems to be very much present.

Frank Pollard tells a story about a real absent-minded professor, however, who was having breakfast with his family. His wife said to him, “Now, remember. This is the day we move. When you come home, go to the new house and not this one.” All day he knew there was something he was supposed to remember, but he couldn’t quite remember what it was. After class, he returned to his home and found it empty.

He saw some children playing in the yard, so he said to a little boy, “Do you know the people who used to live here?”

“Do you know where they moved?”

The little boy replied, “Mother said you would forget.”

Pollard makes the point that Easter is a time we must vividly remember some things. For instance, what is Easter all about anyway? Is it just a spring holiday, just a time for celebrating the budding trees, the blooming flowers, the signs of new life? Is it a time for bunnies and chicks? A time for coloring, hiding, and finding eggs?

Or is there more to it than that?

The women who followed Jesus discovered what Easter was all about. Rising early, they went to the tomb, planning to anoint his body for burial. It was a task that should have been done on Friday evening, but night fell and the Jewish Sabbath began, so they had to wait until Sunday morning.

Arriving at the tomb, they discovered that the stone sealing the entrance had been rolled away. To their surprise, an angel greeted them with what Frank Harrington calls “the most electrifying sentence ever uttered”–”He is not here! He is risen!” (Luke 24:6, NIV).

And that’s what Easter is all about–a risen Savior, a promise fulfilled, and a hopeful future for those who put their trust in him! So whatever else you do to celebrate Easter, don’t forget the real meaning. Maybe you haven’t moved, but the stone did, and so did Jesus–from the tomb to heaven!