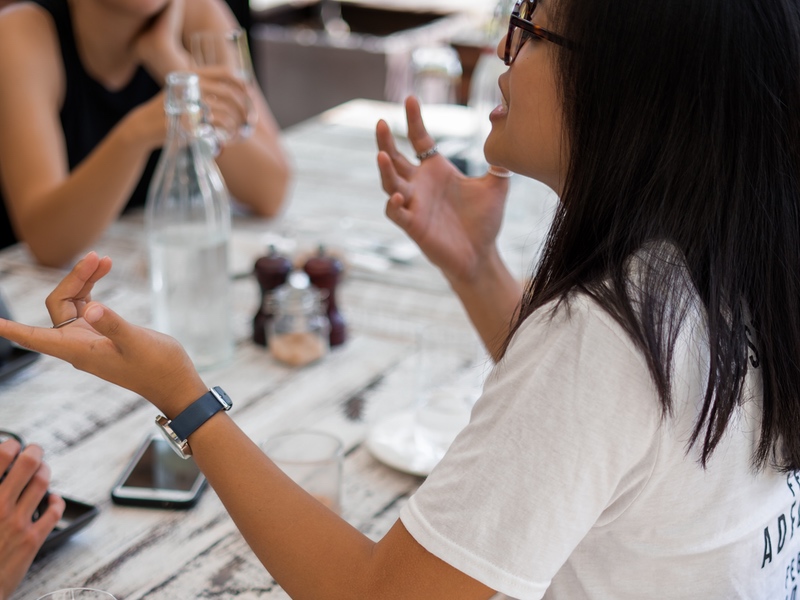 How Scripture, stories and languages intersect

"From that moment on, I was a believer in verbally sharing Scripture stories in everyday life."

“Hi, I’m trying to master your language, and one of the ways I’m learning is by telling stories. Could I tell you a two-minute story that I learned recently, and maybe you can suggest how I could tell it better?”

My family lives in a country where the population is overwhelmingly Muslim, and we’ve seen how this short intro can open up opportunities to share truth from Scripture.* While over 80 percent of the world is literate, it’s estimated that between 4–5 billion of the 7.7 billion residents still prefer oral methods of learning and sharing information compared to written forms. (The irony doesn’t escape me that, since you’re reading this, you’re probably in the minority; most people would have preferred a YouTube video.)

I received my introduction to oral biblical storying almost five years ago when serving in a different Muslim country. Trainers came to expose us to this method for sharing scriptural truth in everyday life. I’ll admit, when they came telling us stories of how orally-oriented people are today, I was a bit skeptical. In particular, the assurance that oral-preferred cultures could accurately repeat stories they had only heard once seemed a bit like a pipe dream.

The trainers gave us one piece of homework on the first day: take the story of Jesus calming the storm on the lake, share it with someone using the oral story-telling method, and report back. No big deal. We did it. However, the person I shared with didn’t seem too interested. Fast forward two days, however, and I was jumping in a taxi with a man from our neighborhood. “You know, your big brother told me a story the other day.” My ears perked up.

“That so?” I prodded, wondering if our team leader who lived nearby had shared with this man.

“Oh? You know I’m trying to learn to tell stories in your language. Do you think you could tell me the story?” This was the true test. Does this stuff really work?

“Ah, well … ” he hemmed and hawed a bit. “I don’t know about that. I only heard it once, after all.” Not too surprising, I surmised. Perhaps my doubts were well-founded.

“Too bad,” I said. “I do enjoy good stories, especially when they’re from the holy books.”

Several seconds of uncomfortable silence passed between us, and I felt like maybe I’d put an awkward lid on the conversation. Then he suddenly said, “One day, Jesus and his disciples were down by the edge of a lake, where he had been teaching people God’s Word, and he asked his disciples to go to the other side…”

I couldn’t believe it! This man went on to share for around a minute, all the details that he remembered from the story that he’d heard. Heard once. Two days ago. He was astonishingly accurate too. In fact, he only faltered and fell silent when it came to the part of the story where the disciples exclaim in Mark 4:41, “Who is this? Even the wind and the waves obey him!” At that point I told the driver that I had heard this story before, too, and I took the opportunity to help him finish it by filling in those words. From that moment on, I was a believer in verbally sharing Scripture stories in everyday life.

I decided to memorize a short summary of key stories that served to summarize the biblical narrative. (I started with Adam and Eve and the first sin, then moved on to Noah, Abraham and the promise, Moses and the law, David and other prophets who foretold the Messiah, and finally reaching completion in Christ and his promise of transformed life and hope for eternity.) Since this verbal summary lasted some nine minutes, I only rarely got the chance to share the whole thing. However, I began to often get the chance to share part of the story that intersected with everyday conversation. In fact, I found it became a lot easier to insert stories from Scripture into daily life in general, when the lessons they taught were applicable.

What does this look like? Well, we learned that one easy way to start incorporating Scripture and stories into everyday conversations was to first ask ourselves the question: what topics do the people around me talk about all day? In our ministry context, the common topics were:

Then, we simply needed to find a pertinent story that could be inserted into those conversations (usually there are several options to pick from). Possible stories include:

These are just some of the examples of what has worked in our part of the world. After telling the story, there are some simple follow-up questions:

This isn’t an exhaustive list, but it usually serves to open the door on a spiritual topic, and it often sheds light on someone’s responsiveness to spiritual things in general — whether they may be seeking.

So, what about your neck of the woods? The story examples above are for the common conversations people have here, and perhaps there is some overlap where you live. What biblical stories could sow seeds of truth into those conversations? Give it a try. You never know how the Holy Spirit can use a simple story to transform someone’s life.