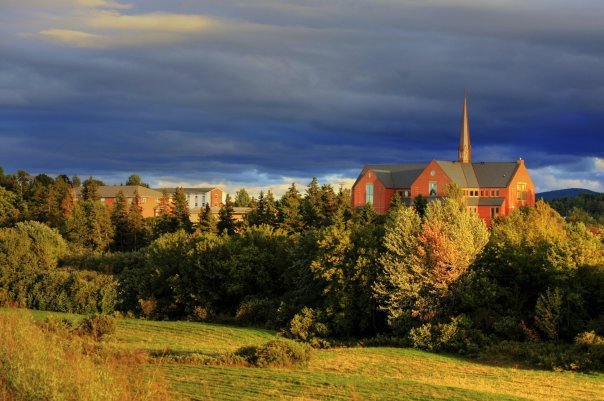 The dream of having an athletic field for Kingswood University in Sussex, New Brunswick, Canada, will soon become a reality.

President Stephen Lennox recently announced that the university will develop its beautiful 20-acre waterfront property into sport and recreational fields thanks to a generous gift of KU alumni, Pete and Ginnie Benson. The founder and co-owner of Beacon Capital Management in Franklin, Tennessee, and his wife will fully fund Phase I of the project and will match donations for funding Phase II.

“A quality competition field will significantly enhance campus life,” said Rev. Kirk Sabine, vice-president for campus life at Kingswood, who is serving as the project manager for the athletic field development. “We will be able to enter leagues and host games. Students will learn leadership, perseverance, comradery, and other life lessons through team experiences. And a competitive sports field will strengthen the connection between Kingswood and young athletes who are called into ministry, encouraging them to become equipped for that calling at the university.”

Phase I includes an irrigated soccer field (110 x 70 meters) with goals, an irrigation pond with pumping equipment that can serve as a winter skating and hockey pond, a softball diamond, and a secondary general purpose recreational field. A lighted “Home of Kingswood University Blazers” sign will be visible from the highway. A gravel parking area and turf care equipment are also included.

The vision for Phase II is to build an athletic clubhouse that will include restrooms, two team locker rooms, storage for seasonal equipment, and a “great room” that will serve as a public gathering place suitable for pre-game and post-game team fellowship. The clubhouse may also serve as a retreat-like setting away from central campus for creative class and discipleship experiences. Outdoor lighting will be added in this phase for the access road, parking, clubhouse, sports field, and pond areas.

In giving the funds for Phase I, Benson, who celebrates the 35th anniversary of his graduation from Kingswood this year, spoke of the influence the university has had on his own family. His mother-in-law, Belva Ingalls Brown, attended the school in its early days when it was Holiness Bible Institute in Woodstock, New Brunswick. As a young boy, he would often travel to Sussex with his grandfather, Bedford Cook, when Cook helped build the new campus in 1964-1965. His uncle, Wayne Cook, served as a member of the board of trustees for several years, and several siblings on both sides of the family have attended the school. Benson is also a member of the current board of trustees.

Upon receiving news of the gift, Kingswood immediately began to work on Phase I. The university plans on having the athletic field in place when students return to campus in the fall.