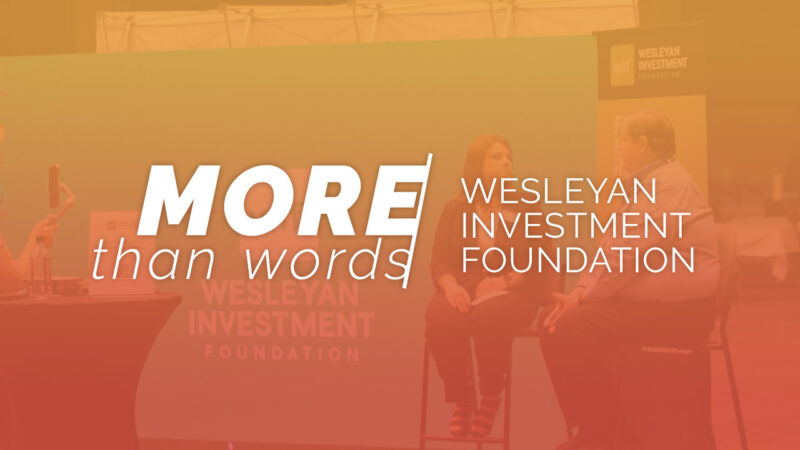 The “More than words” series elaborates on a Facebook post that Rev. Zach Szmara, founder of Immigrant Connection, wrote during General Conference. In the post, Rev. Szmara contemplated Wesleyans’ determination to express our beliefs through our actions.

Part one focused on Immigrant Connection and how it lives into a “radical gospel witness” by serving immigrants and their communities. In part two, we discussed Hephzibah62:4’s century of faithfulness in upholding the sanctity of life. Part three looked at how the Wesleyan Pension Fund supports ministry employees, both clergy and laity.

Today, we will highlight another of The Wesleyan Church’s (TWC) subsidiary that concentrates on stewarding funds: the Wesleyan Investment Foundation.

In 1946, a group of Christians came together to solve a problem. They had noticed church builders struggling to get money because local banks were unaccustomed to how churches operated. In response, the group pooled resources — around $50,000 at the beginning — and started the Church Builders Revolving Fund. Over a decade later, in 1959, the name of the fund changed to Wesleyan Investment Foundation (WIF), and it has remained the same ever since.

WIF’s chief operating officer, Larry Moore, says that John Wesley’s advice to “earn all you can, save all you can, give all you can” has inspired WIF. Their goal, spearheaded by CEO Dr. Craig Dunn, is to steward money for the glory of God. As Larry puts it, they want to always be “funding the work of building the kingdom.”

The foundation started as a way to help churches with the financial side of expanding their ministries. As churches grow, WIF’s practical aid through loans with competitive interest rates lets them expand into new buildings and even new communities. In turn, this brings TWC closer to having a transforming presence in every ZIP code.

In keeping with John Wesley’s sermons, WIF promotes both earning and giving, but they don’t stop there. They encourage church members to save by offering an investment plan. Anyone can open an investment account with WIF, starting with as little as $25. The foundation uses the money to provide loans and also make invested funds conveniently accessible for full or partial withdrawal.

Today, after 76 years of operation, WIF has about $1.8 billion in assets — and they are still growing. As they look forward to the next few years, their hopes for the foundation’s future are simple. “Our role,” Larry says, “is to continue to partner with people and churches to build the kingdom.”

WIF is passionate about the local church, not only the “bricks and mortar, but spiritually reaching people for Christ.” They want to keep following where God leads, giving loans and supporting churches who are spreading the hope and holiness of Christ.

One of the things Larry loves most about his job, he says, is “the opportunity to use the gifts and skills that God has entrusted to me” to reinforce the work of expanding the kingdom. WIF’s staff, along with TWC’s other subsidiaries, use all their unique skills to further the mission. They put the church’s ideals into action, committing to good stewardship of resources.

Ultimately, as Larry says, they strive to responsibly use what God has given them, all “for God’s glory and building the kingdom.”