President Obama and several members of his administration were in Flint, Michigan, on Wednesday, May 4, to see and hear first-hand the reality and impact of the ongoing water crisis. The situation is often referred by him and others as a “man-made disaster that should not have happened.” I’m pleased to report that the Flint Grassroots Initiative (FGI) and The Wesleyan Church were represented in various ways during the day’s activities.

In conjunction with the President’s trip to Flint, Cecilia Muñoz, assistant to the President and director of the White House Domestic Policy Council, invited community leaders to meet with her. I received an invitation to join Ms. Muñoz for “a conversation about economic development and community revitalization priorities, progress, and challenges in Flint.”

I was impressed with her sincerity and genuine desire to listen, engage, and offer assistance in working together for Flint’s recovery. I was able to speak with Cecilia about the personal impact of the tragedy by sharing a story from FGI and putting a face to the crisis. Karen DeSalvo, assistant secretary for Health and Human Services, was also in the conversation. Karen expressed a desire to have follow-up conversations, and I will participate in those with her as I’m invited.

President Obama toured some places in Flint to see what’s happening in response to the crisis. He also wanted to talk with some of Flint’s residents. FGI was asked to submit names from our group for his consideration. Pastor Robert McCathern, our director of FGI and pastor of Joy Tabernacle, was personally selected to meet with the President. Robert was one of nine people who joined a “roundtable conversation” with President Obama prior to his public address.

When I heard that Pastor Robert was selected, I called him. He said, “Richard, I can tell you that I will represent FGI and The Wesleyan Church well!” Pastor Robert lived up to his commitment–we were represented well! During his remarks––President Obama actually quoted from Pastor Robert.

I had the privilege of getting a seat in the room to hear the President’s remarks. He acknowledged and affirmed the hurt, frustration, and anger. He also challenged Flint residents to rise above it–to channel their anger into positive action. He said he was here “to conduct some business” and he stuck to his purpose. I appreciated his willingness to keep Flint at the forefront of national attention!

It was humbling to note that what God is doing through FGI and The Wesleyan Church is getting the President’s attention. Obama quoted Pastor Robert in his “unscripted remarks,” which means he was listening and it struck a chord with him. We’ve also gotten the attention of the EPA, because they are telling the Administration about FGI and what is happening through our efforts.

The President was referring to a Wesleyan story when he said, “Even inmates at an Indiana prison came together to donate more than $2,500 to the people of Flint.” [He got that story about Wesleyan prison chaplains from our published story here, which Dr. Lyon had passed on to White House aides. Ed.]

From my perspective, the President was trying to accomplish four things in his trip to Flint: 1) make his own assessment of the crisis and the situation in Flint; 2) publicly commit the federal government to helping Flint recover, through financial support, expanding current programs, and implementing new ones; 3) apply pressure to the Michigan state government to bear their responsibility for the disaster and commit to helping fix it; 4) calm some nerves, alleviate some frustration, and instill some hope by assuring the Flint residents that they are not forgotten nor are they alone in this long recovery process. He said as much when he declared, “Flint, I’ve got your back!”

This city finds itself in a very complicated situation. The road to recovery is long and hard. It’s a common theme heard in Flint. That was also President Obama’s message on May 4. Flint Grassroots Initiative (FGI)–and the Wesleyans (in East Michigan)–are in this for the long-haul, and we need people who will stand with us for the duration! God is uniquely positioning us to live out his kingdom in a way that has the government and other organizations asking us to help them. We’re deeply engaged in relief efforts and those will continue as long as necessary. Now we have to turn our attention to longer-range solutions for the recovery and rebuilding of Flint. This will require prayer support, financial support, and volunteer support that intensifies instead of dwindling.

I have talked with several government officials and community leaders. Here are a few of my takeaways from the day’s experience: 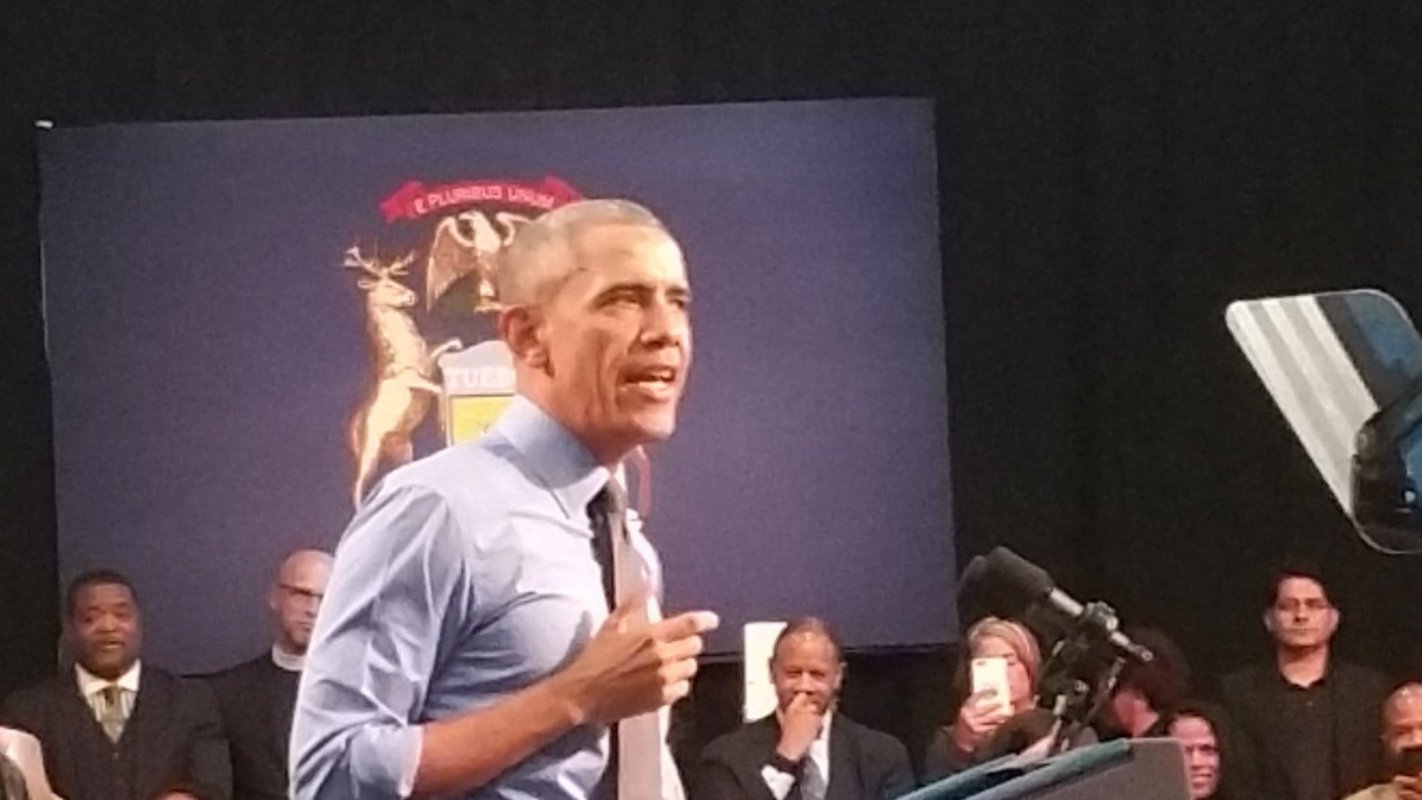 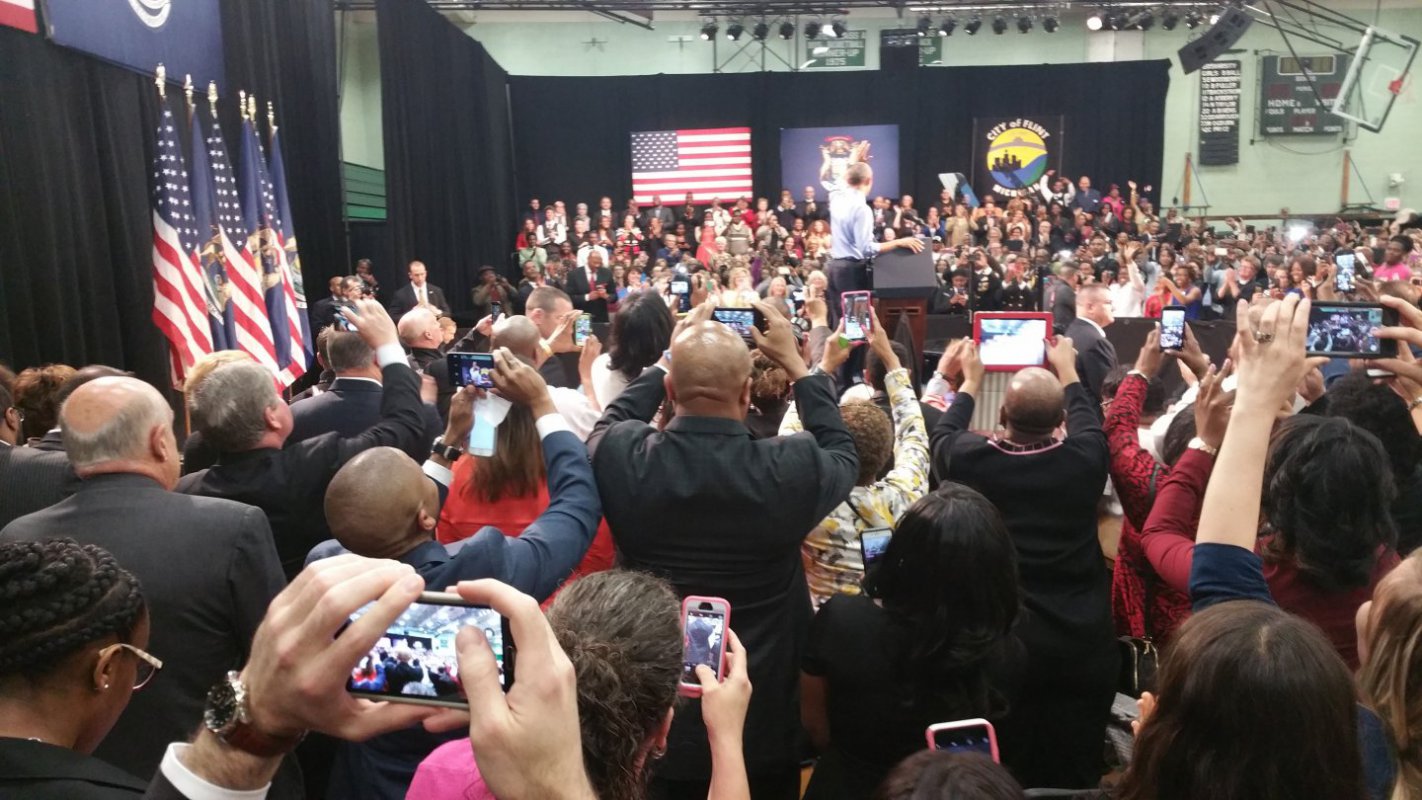