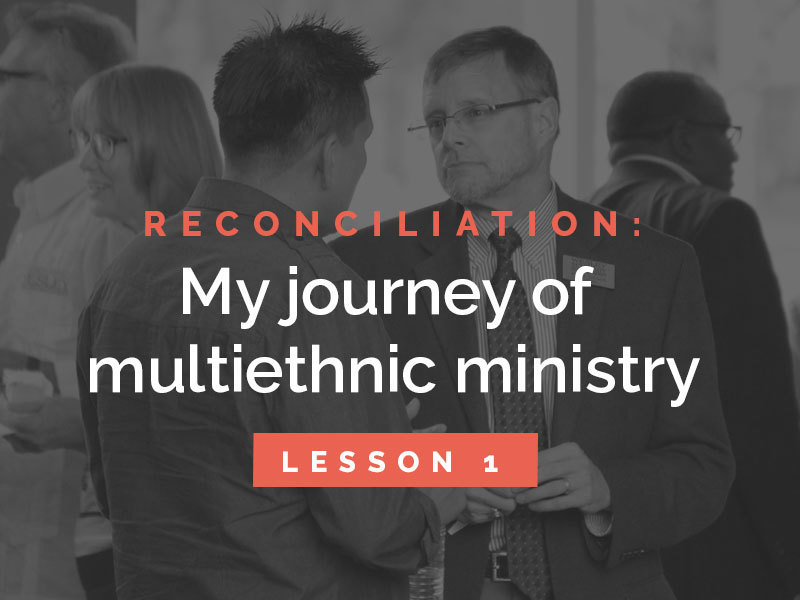 Journey with me as we learn together how to lead, encourage and engage in the areas of multiethnic ministry and racial reconciliation.

I penned “I’m grieving” in response to the racism and violence taking place just over a month ago. My expression of lament was neither the first nor deepest shared, but it certainly poured from my heart. I’m grateful for the continual outpouring of racial reconciliation resources provided by Wesleyans calling and leading us to reflection and action.

Last year, I wrote about 40-Year Lessons, preplanned to coincide with completing 40 years of credentialed ministry in The Wesleyan Church. I did not anticipate doing something similar this year but was prompted to write about some lessons I’m learning on my own journey of multiethnic ministry and racial reconciliation.

There’ve been three contexts over the past quarter century which have been personal “learning laboratories.” The first was Kentwood Community Church (KCC) in which I’d helped to plant in 1979. I had sensed a calling to this Grand Rapids, Michigan, suburb, which overtime, became increasingly multiethnic while our church did not. So, nearly 20 years into our history, KCC began the journey to become a multiethnic church.

In 2010, I transitioned to giving leadership to Wesley Seminary at Indiana Wesleyan University in its early, formative years. I was told my participation in the multiethnic journey at KCC and the desire for the seminary to include a variety of ethnicities and nationalities were factors in my selection. I will say it is easier to start multiethnic than transition later.

So, I’m writing about some lessons learned and mistakes made along the way. There is so much yet to learn and I suspect many mistakes yet to be made. I invite you to journey with me.

It is impossible to include every verse, lesson or person. This is particularly felt because there have been so many amazing people along the way — some people of color, some white. God has always graciously surrounded me with amazing people.

I often say God did that because he looks down from heaven and says, “That boy needs help …”  I say, “I’ve needed safe people to ask my dumb questions …” I’m grateful for so many raw and real “crucial conversations” which were so much more than verbal chess matches. As my friend, Aaron Holley, puts it, “when you don’t know … you tiptoe.” Well, no doubt I stepped on some toes in this learning process.

Beyond whatever personal reasons I might have, I’m writing because of a calling we long and pray for as a Wesleyan Church family — to be a Kingdom Force that is multigenerational, multiethnic, multieconomic, women and men, lay and clergy, everywhere to everywhere — a disciple-making and church-multiplying movement of God expressing the transforming presence of the Holy Spirit in every ZIP code.

We must close the Gospel Gap, so everyone has the opportunity to hear and respond to the gospel. We want to see lives, churches and communities transformed through the hope and holiness of Jesus Christ, so that through love and justice, God’s Kingdom comes on earth as it is in heaven.

People of all languages and ethnicities will be gathered around his throne (Revelation 7:9) — let’s get started now!

Both men of God, both served terms as mayor of Kentwood, both passionate about racial reconciliation centered in Christ Jesus, and both bridge builders for the sake of thriving diverse communities.

Jerry DeRuiter: I first took him to lunch as a young pastor seeking to learn from him as mayor of our city. He became a mentor, encouraging me to engage rather than avoid conflict in order that truth and justice might prevail. He joined KCC, later became the vice-chair of the board and eventually transitioned to serve as executive pastor. Jerry loved me enough to not let me off the hook in my multiethnic journey. He broke up hard ground in my life to plant the value of “trust over tension” in relationships to focus on building trust when I just wanted to reduce tension. He challenged me when my need to please interfered with God’s plan to prune.

Bill Hardiman — he and his wife, Clova, were among few African Americans in his predominantly white Assembly of God megachurch. Through his presence and “speaking the truth in love” in both very private and very public settings, Bill spurred so many of us out of our comfort zones and into the courage zone. He hammered home that strategy is no substitute for the Holy Spirit – to discern what God is doing, and to surrender to the Spirit so I would not only DO different but BE different.

There are defining moments and daily moments.

In the 1990’s, the PromiseKeepers’ movement called for racial reconciliation through intentional relationships. It was the first time I’d been in a gathering that size that called for societal and spiritual transformation to address the catastrophic consequences of racism.

It was a defining moment for me and thousands of others. It led to an intentional commitment for me to meet regularly with Bill Hardiman. From stadium seat to restaurant booth, from a defining moment in a crowd to daily moments with a friend, our conversations bridging differences denominationally and ethnically were so enriching for me.

Defining moments may be good or evil, or a mixture. They may be precipitated by occurrences in our broader culture (as we’re now experiencing in the U.S.), relationships, conversations and experiences, or erupting from encounters with the Holy Spirit or with satanic forces.

There is power in the rhythm of defining and daily, transforming my life and leadership to more fully experience the blessing of multiethnic relationships and recognize the ugly realities of systemic racism.

Both evil and good have the pattern of defining and daily moments. Racism works that way. It can show up in a video seen by thousands who see the life choked out of a helpless person, or in a moment experienced by one or two as the potential contribution of a person is dismissed as just filling a quota. Evil thrives in darkness and secretiveness, but more than ever social media drags it into the light.

Our sovereign God somehow uses it all for His purposes (Romans 8:28).  When defining moments are so ugly and awful, he feels absent or the Spirit is so evidently present that every knee bows.

I value “defining” moments, but also the compounding benefit of “daily” moments. Both require stewardship and leveraging. I can’t sustain the emotion of a defining moment — they can be exhilarating and exhausting.

Comparison can be dangerous, but here goes. Whatever “exhaustion” I experience in no way compares to my friends of color. My skin color allows me to check in and out of the pursuit of racial reconciliation and justice, even as my love for them convicts me when I do so. It is a daily grind for them without the option to opt out. I’m in awe of their grit. I’m further humbled by reality of how I can add to their exhaustion by calling on them when I’m intermittently motivated to engage. The prevailing righteousness of their indignation and the winsomeness of their joy are testimonies to God’s sufficient grace.

I must steward and leverage the momentum generated by defining moments. And because being “faithful in little things” can lead to more, what may seem less significant in the daily moments may well be building blocks in the creation of a sustainable, systemic new reality.

Some people are naturally better in defining moments — they rise to the occasion. Others are better in the daily moments. We can’t settle for what comes natural — God expects and empowers obedience in every moment. It is obedience with perseverance — stamina. That means prioritizing soul care because racial reconciliation requires a deep well.

Both defining and daily moments are needed. Some people become addicted to defining moments. They fake, manufacture, inflate or spiritualize them. Defining moments lose their purpose and power when overextended – righteous indignation becomes a root of bitterness, what was once fresh becomes moldy, preservation brings perversion. Even when the motive is right, like Peter building shelters for those transfigured, we build organizations that miss the transcendent moment. So many times, I’ve fallen out of step with the Spirit by trying to stretch what He did before rather than steward the now and the next.

Whoever wants to be my disciple must deny themselves and take up their cross daily and follow me (Jesus’ words in Luke 9:23).