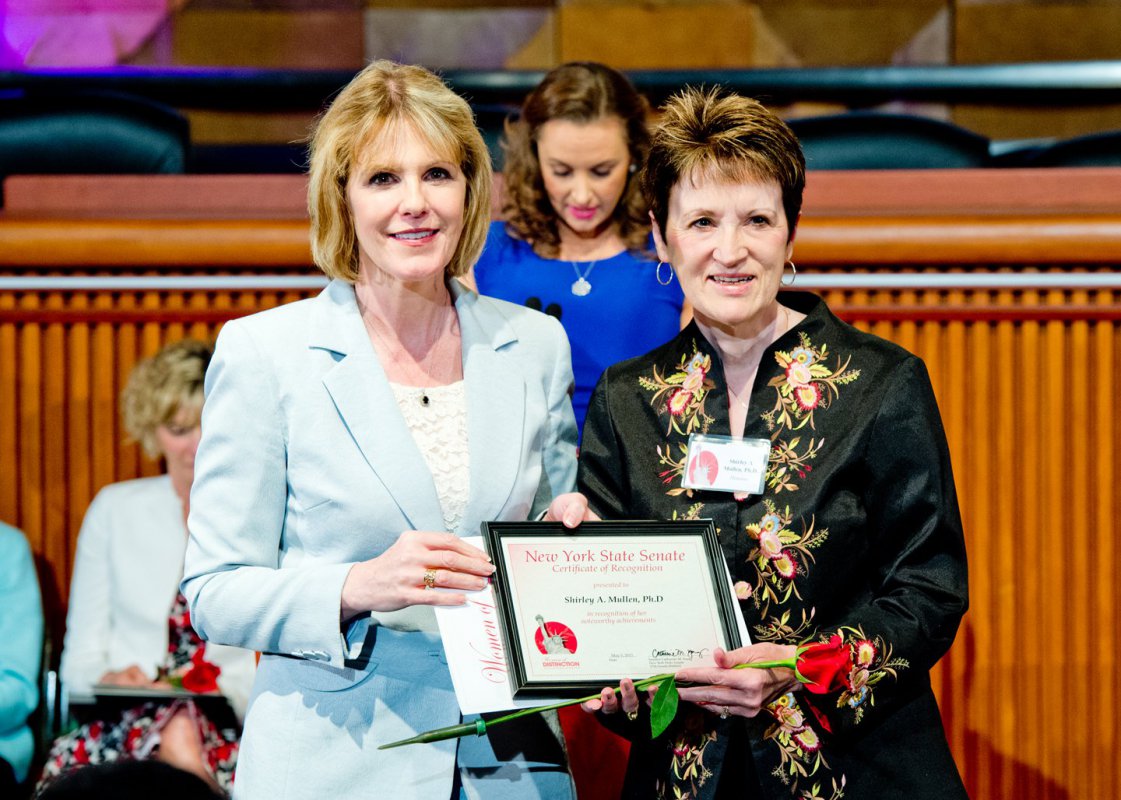 For her distinguished career in the field of higher education, Dr. Shirley A. Mullen, President, Houghton College, was honored this week as a New York State Senate 2015 "Woman of Distinction."

For her distinguished career in the field of higher education, Dr. Shirley A. Mullen, President, Houghton College, was honored this week as a New York State Senate 2015 “Woman of Distinction.” Senator Catharine Young (R,C,I-Olean) selected Dr. Mullen as the 57th Senate District’s honoree for her long and distinguished record in higher education and community outreach.

“Dr. Mullen, with her acclaimed career in higher education and her efforts to better our community, is an obvious choice for this recognition,” said Senator Young. “She has invested over 40 years of her life preparing young people to be responsible citizens and ensuring they receive the highest quality education. Dr. Mullen exemplifies the character and integrity fitting of the Woman of Distinction recognition.”

“She is truly an example for the young women studying at Houghton and women of all ages in our community. It is people like Dr. Mullen, with the qualities of humble service and dedication, who strengthen our society and make our communities better places to live,” said Senator Young.

“I am grateful to Senator Young for this honor. It was inspiring to be among women who have chosen to see their futures shaped by gratitude and hope—rather than by despair—no matter how difficult their circumstances. They have imagined change and made it happen in the most impossible places! We can only hope that these stories will give others the courage to do the same,” said President Mullen.

At the ceremony, Dr. Mullen and other distinguished women from across New York State were lauded for their service and commitment to their respective communities. The New York State Senate Woman of Distinction honor was created in 1998 to annually pay tribute to those women in New York who have demonstrated remarkable character, initiative, and commitment in serving their neighbors, strengthening our communities, and acting as role models that all should strive to emulate.

Dr. Mullen was raised in western New York where her parents each spent over 30 years in education, her father as a professor of philosophy at Houghton College and her mother as a teacher at Fillmore Central School.

After nearly 25 years of service to higher education on the west coast, Dr. Mullen returned to her alma mater in 2006 to bring her wide ranging experience to the service of higher education in Western New York.

Dr. Mullen’s trademark in higher education is her commitment to high ideals and practical impact. Since returning to Houghton, she has reinstituted the college’s historic connection to the West African country of Sierra Leone; extended the college’s engagement in Buffalo through a partnership with Western New York AmeriCorps; established a partnership with the Greater Allegany Chamber of Commerce to form Leadership Allegany; developed a signature Christmas program featuring over 200 student musicians; established the Center for Faith, Justice, and Global Engagement; and moved Houghton athletics toward NCAA-Division III status.

Along with her service to Houghton College, Dr. Mullen also serves on the boards of Allegany County United Way, Bread for the World, Fuller Theological Seminary, and the National Association of Evangelicals, as well as the Tax Committee of the National Association of Independent Colleges and Universities. She has chaired three accreditation review teams for the Middle States Commission on Higher Education.

“As an official New York State Senate Woman of Distinction, Dr. Shirley Mullen’s dedication and service will live on in perpetuity as an example for future generations. She is worthy of our deepest respect, admiration, and heartfelt thanks,” Senator Young said.