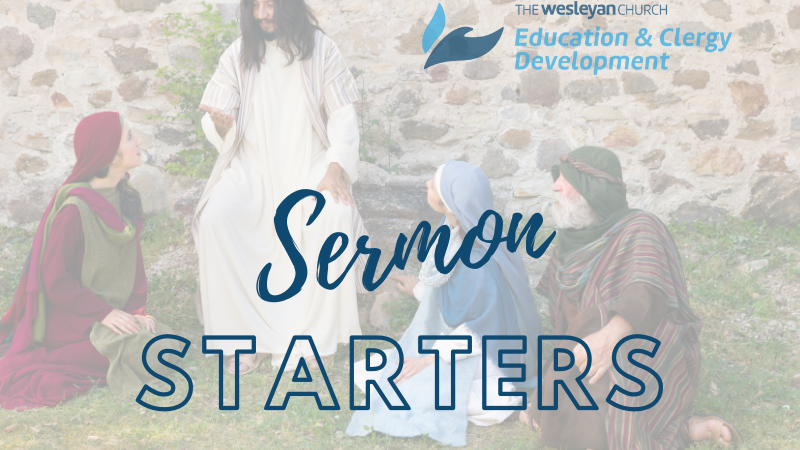 Jesus was a famously good storyteller. On hillsides and shorelines, Jesus held audiences spellbound with his way of sharing in images and narratives that expressed core human needs.

“Ways to Start a Sermon” – Ask a Question

Jesus was a famously good storyteller. On hillsides and shorelines, Jesus held audiences spellbound with his way of sharing in images and narratives that expressed core human needs.

Below are three good uses for stories in a sermon introduction, with examples of how each one can be used.

1–To communicate a hard truth that people might otherwise reject.

“Nathan came to him and said, ‘There were two men in a certain city. One was rich, and the other was poor. The rich man had a very large number of sheep and cows, but the poor man had only one little female lamb that he had bought. He raised her, and she grew up in his home with his children. Now, a visitor came to the rich man. The rich man thought it would be a pity to take one of his own sheep or cattle to prepare a meal for the traveler. So he took the poor man’s lamb and prepared her for the traveler… David burned with anger against the man. ‘I solemnly swear, as the Lord lives,’ he said to Nathan, ‘the man who did this certainly deserves to die! And he must pay back four times the price of the lamb because he did this and had no pity.’ “You are the man!” Nathan told David.” (Adapted from 2 Samuel 12)

Had Nathan come directly to David with a rebuke, David would likely have been defensive, angry, and rejected his feedback. Instead, Nathan found a way to depict David’s sin that gave him empathy for the person he had wronged.

Whether you create a parable, tell a historical narrative, or share a story from your own life (just avoid telling a story in which you’re the hero), stories can help congregations receive truths that would be less effective if shared directly.

2—To re-examine something familiar.

“One of my neighbors has a daughter who (a few years ago) fell off the face of the earth. She withdrew half her parents’ money, spent half their savings on drugs, alcohol, and vacations, and refused ever to talk to her parents. They woke up to a text one morning saying, ‘You’re dead to me; I’m going away, and you won’t hear from me again.’ and then suddenly the contact stopped.  They kept reaching out, but no reply. They called; but no response… her phone was disconnected. Every morning, the two parents would wake up early and scan the horizon, just hoping her car would turn onto their street–hoping they would get to see their daughter again. One day…”

This modern re-casting of the Prodigal Son helps the congregation recognize the lavish extent of forgiveness that God extends to us (and invites us to extend). At their best, sermons teach people to read Scripture with curiosity: the best stories help people gain fresh insight on passages that feel familiar and well-worn.

“We were sitting in a booth at a restaurant, and my three year old was peeking over the booth at the people behind us. He hollers, “hey, why is this guy bald?!” I pull him down and quietly explain that we don’t comment on people’s appearances, because we don’t know if something we say might hurt their feelings. He asks me, “if I have a question though, can I ask quietly?”, and I answer him, “yes, if you have a question about somebody, you can whisper it in my ear.” Before I realize what’s happening, my son leans down over the man’s shoulder and whispers in his ear, “why are you baaaaalllllld?”

This story leaves the congregation laughing at something most of us have experienced: seeing a child do something they are convinced is right, but that we (as adults) experience as incredibly uncomfortable.

If the preacher told this story, she could follow up by saying, “We laugh at these ridiculous moments with kids, partially because kids are so cute; and partly because they’re convinced what they are doing will lead to a good result, when we know it won’t. I’m realizing, though, that as those kids become adults, most of them don’t grow out of this… There are still things that come naturally to me that don’t lead me to the kind of life I want.” By doing so, the preacher would build another layer of shared experience: an awareness that as we grow from children to adults, we continue to do things that seem right, but lead to things we don’t want.

For more tools on how to start a sermon, subscribe to wesleyansermons.com!

Rev. Ethan Linder serves as Pastor of Discipleship at College Wesleyan Church, and Communications Coordinator and Lead Writer at Education and Clergy Development.