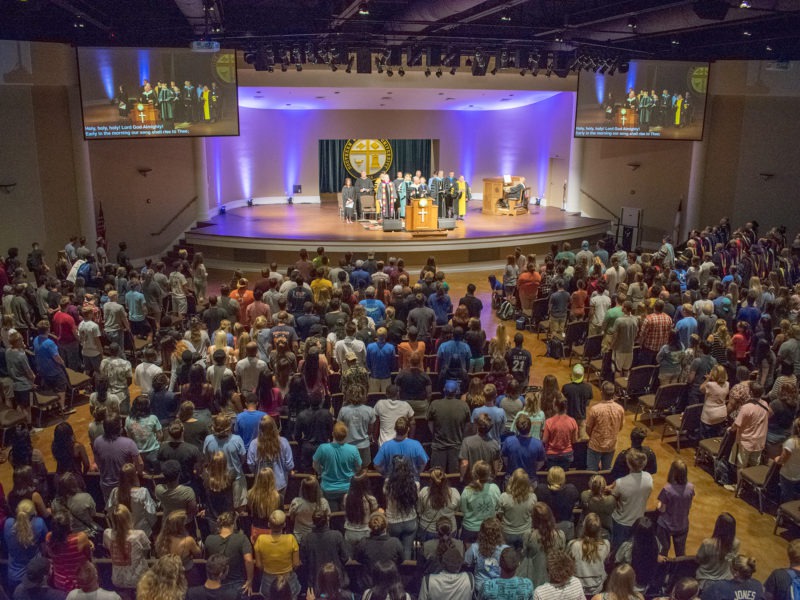 Increased traditional student enrollment and improved retention give university a strong start for 2017-18.

Enrollment of traditional students has been consistently climbing since Fall Semester 2013. Southern Wesleyan’s headcount is 46 percent higher going into the 2017-’18 academic year than it was four years ago. After welcoming 273 new students this fall, Southern Wesleyan’s headcount currently stands at 872. This includes new freshmen, new transfer students and students enrolled in OneLife, a gap year program in its first year.

The university’s Full Time Equivalent (FTE) enrollment currently stands at 789, which represents a 37 percent increase over 2013.

“We do not take growth for granted and feel so blessed to be continually expanding our academic, athletic and student development options as a result,” said Dr. Todd Voss, Southern Wesleyan’s president. “We are committed to being a faith-filled campus intent on innovation and inventive learning. This growth represents individual students with the hope and dream of making the world a better place. Our goal has been, and will always be, to impact the world for Christ, and the more Warriors we have in that mission, the more incredible the outcome!”

Southern Wesleyan is also experiencing the largest residential population in its history, according to Dr. Joe Brockinton, vice president for student life. Chad Peters, vice president for enrollment management, commented that campus housing options this academic year have all seen improvements – from a new 243-bed residence hall that opened for the first time in August to extensive improvements in existing campus housing currently available to students.

Peters noted that one of the factors driving current growth has been an improvement in retention rates. Emily Bloxdorf, Southern Wesleyan’s director of retention, reports a 76 percent retention rate, an increase of 5 percent over the previous academic year.

Bloxdorf credits the efforts of the university’s admissions office, TRIO Student Support Services and athletics programs, as well as an increase in student activities offered and a new residence hall, for improving retention.

“This is really something to be thankful for. This is not solely an Office of Retention thing, it’s an ‘all of us’ thing,” Bloxdorf said.

Southern Wesleyan University is a Christ-centered, student-focused learning community devoted to transforming lives by challenging students to be dedicated scholars and servant-leaders who impact the world for Christ. For details about degree programs, go online to swu.edu.