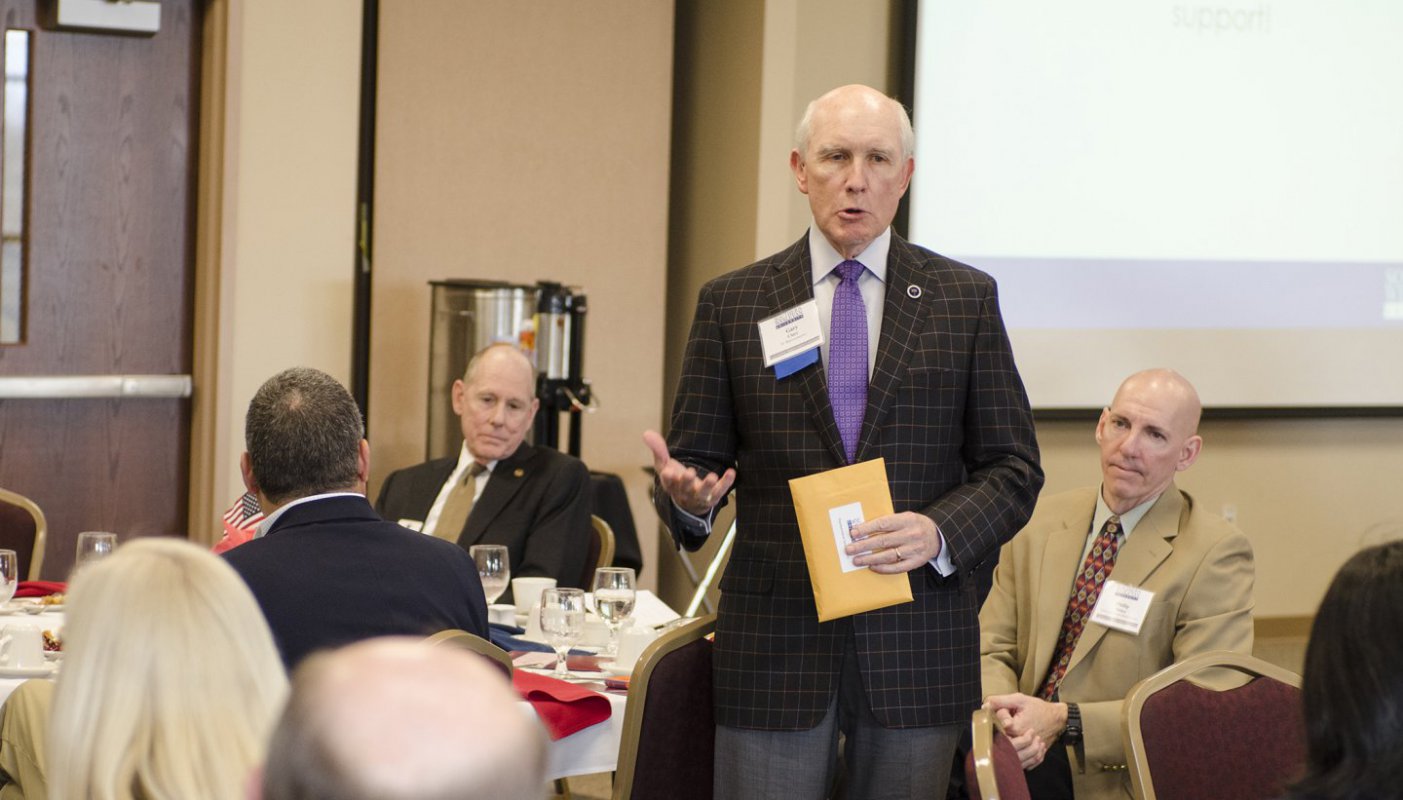 Southern Wesleyan University hosted a luncheon for federal, state, and local government representatives in an effort to express appreciation and focus on positive relationships.

Many of the area’s elected and appointed officials in federal, state, and local government gathered at Southern Wesleyan University in Central, S.C., to get updates on “town-gown” relations during the Legislative Appreciation Luncheon, February 22.

The purpose of the annual luncheon is to show appreciation for government officials and to focus on positive relationships these leaders have forged with Southern Wesleyan and its students through their support of federal and state financial aid. Southern Wesleyan University President Todd Voss shared about the latest projects on the Central campus, which include the near-completion of the six-court Rev. Leroy C. Cox Tennis Complex and the Nicholson-Mitchell Christian Ministry Center.

Dr. Voss also shared future plans, which include a retirement community, and he reiterated how the surrounding community benefits from present and future projects. An example he gave was the tennis complex, which will be open year-round to area tennis enthusiasts and a new amphitheater that will be open to the community for outdoor events. Voss also talked about future events, which includes hosting of the Area 14 Special Olympics April 6.

Erin Harrison, a freshman from Belvedere and a criminal justice major, spoke about how Palmetto Fellows and the S.C. Tuition Grant scholarships have made her college education possible and thanked state lawmakers for their support of state tuition assistance.

“Growing up in a working class family, this was extremely important to me. Scholarships were the only way for me to ever get higher education,” Harrison said. “I believe I was called here to Southern Wesleyan. There’s something special about this place.”

Melanie Gillespie, Southern Wesleyan’s director of financial aid, also emphasized the importance of support for tuition programs that benefit students choosing to attend a Christian college or university “so that they may grow in their faith as well as their learning.”

Mike LeFever, President and CEO of SCICU (South Carolina Independent Colleges and Universities), pointed out how the state’s private colleges “are a reflection of our population,” noting how legislative support of state grants and other financial aid makes a positive impact.

LeFever noted that private colleges don’t receive direct state or federal aid, emphasizing that campus buildings and renovations come not from state appropriations but from alumni and benefactors showing how they want to invest in the next generation of students.

“I don’t know of a finer investment we could be making in the future of the young people in our communities,” said State Sen. Thomas Alexander (R-Oconee).

“SWU is inspiring to me. We typically deal with all of the things that are going wrong in our county but it’s nice to be here and see what’s going on right in our county,” said State Rep. Neal Collins (R-Pickens).

Six Mile Mayor Roy Stoddard praised Voss for his vision for the university and community and “putting that vision to work.”