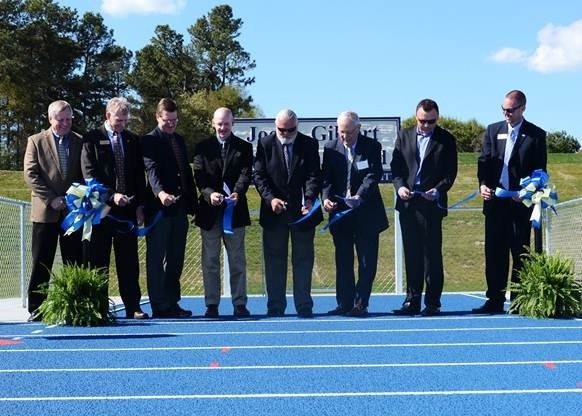 “Today this track and field adds to the forward momentum of the growth of our university and to the NCAA Division II transition that we’re currently in,” said Chris Williams, director of athletics. In addition to being of benefit to the community, Williams noted that future plans include hosting of high school track and field competitions as well as conference, state, and national championships.

The new facility, now at the completion of its first phase, was named after the father of donor Cameron Gilbert, who is father to Shelby Gilbert, a sophomore on Southern Wesleyan’s Women’s basketball team–this year’s regional NCCAA champions.

Cameron described his father as a Christian man who had a strong work ethic and a great love for his family–especially his grandchildren–as well as an incredible passion for higher education and collegiate sports. Despite having only an eighth-grade education, Cameron’s father believed education is an equalizer. He added that his father missed only five or six out of Shelby’s nearly 400 basketball games while she was growing up.

University President Todd Voss said that members of Joe Gilbert’s family desired to honor him through the naming opportunity for the Southern Wesleyan’s new track and field.

“This is a new beginning in so many ways,” Voss said, adding that he welcomes citizens in the surrounding community to use the track for running and walking.

“Community involvement defines who we are in this project,” said Charles Joiner, who chairs Southern Wesleyan’s board of trustees. Town of Central Administrator Phillip Mishoe thanked Southern Wesleyan for including the surrounding community in their plans to develop facilities such as the track and field complex.

“I think other universities will look at this concept and wonder why they are not doing it,” Mishoe said.

Lisa McWherter, Southern Wesleyan’s vice president for advancement, thanked all who came forward to support the track and field complex.

“This is but one of many examples of how SWU seeks to be a generous university with God’s resources,” McWherter said. “This is His track and field complex, and because it is His, it’s our pleasure to share it with all.”

Tom Ponder of Pickens County Council recalled how, after hearing from Voss and Williams during a County Council meeting, they decided to back Southern Wesleyan’s efforts to become a NCAA Division II athletic program and to develop the complex.

“We have to make a decision on whether or not to invest based on the best needs of the county. In this situation, it was a no-brainer based on the vision and plan this university has for this facility,” Ponder said.