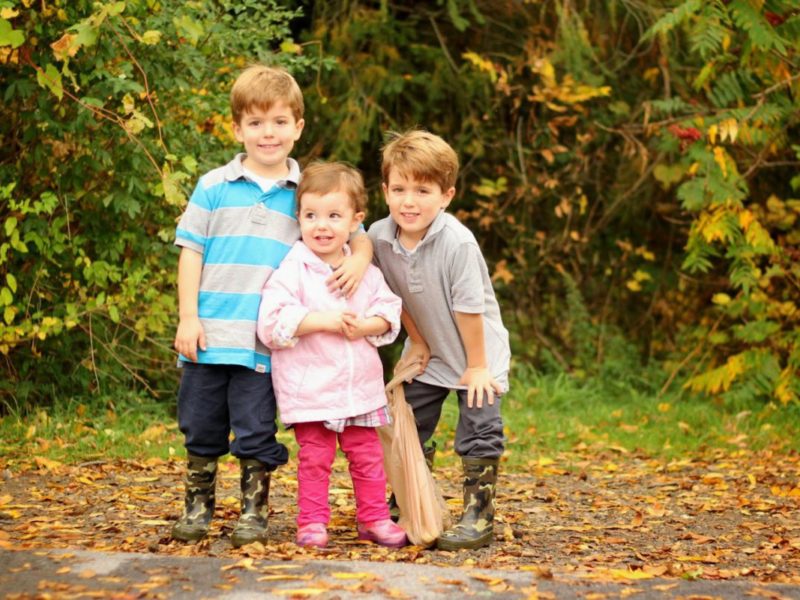 One Houghton alum and her family never would've asked to walk the road God has placed them on. But they continue to walk with Jesus one footstep at a time even when they don't understand his ways.

I know that many go through life with similar expectations: house, kids, and success. Our standards of success may be different from non-Christians, but we still believe that God has good things for our future. We want to raise our kids with the knowledge of good and evil. To show them that they can rely on God because He is the same yesterday, today, and forever. We want them to use their God-given abilities to better serve the Lord and further His kingdom.

One problem. Life happens. Stuff happens. Good stuff, bad stuff. It just happens. Our only choice is how we choose to react.

Last January, my husband Andy and I were thrilled to find out that we were pregnant with our fourth child. After already being blessed with twin boys and a little girl, we felt our hearts could just burst with joy at the thought of welcoming another. And then just two weeks later, we found ourselves living every parent’s worst nightmare. Our four-year-old son Ben, who was otherwise completely healthy, started complaining of headaches. A few days later, it was discovered that Ben had a brain tumor. It was a cancerous tumor. An aggressive one. And the doctors said he had just weeks to live.

Phew. That’s a whole lot for a young family to process.

After the initial shock, my reaction was one of determined faith. I have been a Christ-follower for as long as I could remember. Andy was, too. God has always been good to us–even through life’s tragedies–and we knew Him well enough to know He would never leave us. People rallied around us in prayer and support. We were praying for a miracle. But as time passed and the treatment only seemed to stimulate its growth, my attitude started to change. My faith had turned to frustration. I was angry. Really angry.

Our son Benjamin is a twin. His identical brother, Jack, watched the whole thing unfold right before him. Never having navigated a road like this before, we only explained what we felt was necessary for a four-year-old to understand, but he was there through it all. He and his two-year-old sister Megan watched Ben cry in pain at the intense headaches, they watched his hair fall out after the aggressive radiation and chemotherapy treatments, and they saw his desire to run and play outside progressively decrease. He didn’t have the energy to run outside anymore and eventually, he lost his ability to walk completely. Hospice nurses set up a bed in our living room so we could care for him at home. Ben slept at odd times of the day which meant we had to keep the other kids quiet. He gained a lot of weight in his face and torso because of the steroids that were helping to keep the swelling in his brain down. His appetite was through the roof. He grew very moody. And anxious. We couldn’t allow people to come over because he grew agitated at their presence. It got to a point where Andy and I couldn’t even leave the room to use the bathroom. Such a change from our sweet, easy-going goofy little boy. Our peacemaker, the one who acted as the go-between the siblings. It was absolutely heartbreaking.

We were still praying for a miracle. And though we never lost sight of that hope, it was miserable to realize the horrific possibility: we were watching our son die.

It ended up being about ten weeks from Ben’s diagnosis to the day he took his first heavenly breaths. A mere three months. In some ways, it felt like forever. In other ways, it didn’t feel long enough. Parts of me refuse to acknowledge it even happened at all. Those months were the darkest of my entire life. Newly pregnant, caring for two other healthy kids, and ushering my sweet second-born into his heavenly home. Oh, the emotions that conjures up even as I write those words.

The disconnect from my mind and my heart has seemed vast at times. There are things that I know in my mind to be true: God is in control. Heaven is real. Ben is no longer in pain. And yet my heart says, but what kind of God allows this to happen? How could He not spare him? And why do I need to be grateful that my son is no longer in pain? It’s just not fair! I’m finding that much of my grief journey is a constant battle between my mind and my heart.

I’m learning, though. I’m learning that it’s okay to be angry. Frustrated. Sad. Joyful. Sometimes, all within a matter of moments. God is God and I am not. I’m learning that it is normal for sadness and joy to exist at the same time. I’m realizing that grief is not a linear path but rather, a complicated labyrinth. I’m learning to extend myself–and my husband–some grace. To not be so hard on ourselves. To applaud ourselves for getting out of bed some days. For taking a shower. For planning for tomorrow. And to look for ways to encourage others. Because we’ve found there’s no greater way to pull ourselves out of a deep emotional pit than to think of how we can come alongside someone else who is struggling.

We are still learning. I can’t imagine ever getting to a point where we will be done. Where we will have learned everything God wants us to know. But I’m not going to stop trying.

It’s been nineteen months since Ben died. I miss him like crazy. Every single day. His face is wrapped around every memory in our history: raising twins in the city, welcoming another child, moving to the suburbs and then getting pregnant with Kate just before the headaches started. His pictures are hanging all throughout my house. I see his dimples in his brother’s face, his sparkle in his brother’s eyes. Many times, I laugh when I see his picture, at the goofiness of his actions or the gentleness behind his sweet hugs. Other times, tears start falling without me even realizing. I hate the fact that Andy and I are Bereaving Parents. That Jack is a Twinless Twin. That Kate is a Rainbow Baby because she was born after her brother died. That Megan no longer has her protector. I hate it. I totally hate it.

But after I’ve cried my tears of sorrow, God wipes them away. He lets me cry, get it all out. And He just holds me. Sometimes, I can physically feel the weight of His arms wrap around me as I lay awake at night. Comforting me. And whispering words of peace. And if I listen closely, I would know that He was weeping with me. Because the God that I know is a good God. A God of life. And I know that He knows my pain because He lost His Son, too.

I never asked for this. Never in a million years would someone ask for this. Never. And yet, my family doesn’t have the corner on the market on tragedy. So many families have been asked to walk other difficult roads. But even if I were to try and turn around I could never undo what has been done. And so we walk. One foot in front of the other, one day at a time, one moment at a time. Until the day that God calls us home.

Mindy (Albrecht ’03) Sauer is a graduate of Houghton College. View the original post.