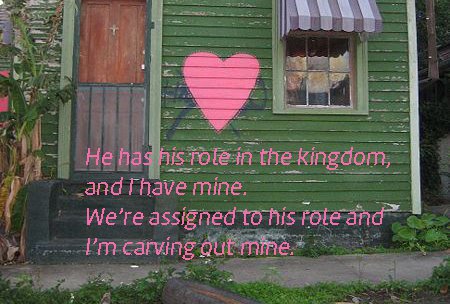 God whispered, “Marian, I’ve called you to stay. You have vision for community and for simplicity. You wanted to move to where it was already in place, but I’ve given you a blank canvas."

“While I was in the canyon the Lord challenged me. The next time we move, we’ll move for you,” my husband Nathan promised.

Was he serious? I hoped he was serious. I remember the freedom that washed over me. Freedom to dream. Freedom to answer the call on my own life. Freedom to show him what I loved in the kingdom of God.

A month later, I booked tickets for the two of us to head to the Dominican Republic. There was an organization down there that had captured my imagination. I loved what they were doing. I loved the villages they educated. I loved the team of people who comprised their missional community. I was eager to show him, knowing the real possibility existed of us joining.

A couple weeks before we were scheduled to visit, a call came in for my outdoorsy husband. A church in Colorado was looking for a pastor. Their leader of thirty years was resigning to chase his dream of an urban church plant. What they needed was a guy to revitalize this suburban church—right in the shadow of the Rockies.

So my husband booked another set of tickets.

I had my set of tickets and he had his.

We were three days into our trip to the Dominican Republic when I realized Nathan was miserable. Normally an extrovert who hardly stops talking, he was at the back of the crowds, intimidated by the language barrier and unsure of where he was supposed to help. Repeatedly, he made it clear that children’s ministry wasn’t his thing and that, if we moved, he’d be down by the ocean running a kayaking company. This school and these kids would be my ministry and the ocean would be his.

Toward the end of the trip, we had scheduled two days by ourselves at a hotel. While there, we met a couple from Colorado and Nathan jokingly suggested that this was a neon arrow, an omen, pointing us west.

I was furious. “Then what about the promise you made to me? What about the Lord telling you the next time we moved it would be to follow my calling?”

This was March. We moved to Colorado in July.

My husband has never been more fulfilled and more satisfied in the local church before. I have never felt more displaced. These people are wonderful. I love them. But I was suddenly presented with the obstacle of living the way of suburbia and living in the midst of it. Something about that looming Bed Bath & Beyond sign around every corner makes me want to vomit. The perfectly groomed yards and three cars to a family makes my skin crawl. The sheer busyness of families and overbooked calendars keeps us isolated from each other.

Yet here we are.

He has his role in the kingdom, and I have mine. We’re assigned to his role and I’m carving out mine.

I cannot count the number of conversations we’ve had regarding that promise he made me when exiting the canyon over two years ago now. Do I still feel hurt? Yes. Has he apologized? Yes. Are we still a team? Absolutely.

But slowly God has presented me with continuing education. He’s introduced me to people who live beautifully right here in America. He’s shown me that sometimes the harder ministry is to stay.

Who does that? Who hands someone a blank canvas and a brush and tells them to create?

It’s possible that God trusts me more than I realize. That not only has he given me a hunger for something, but he’s also imparted the vision so clearly that he trusts me to create it. It’s more likely that he loves my scribbles.

Is it hard? Feeling called beyond the church walls when my husband is so absolutely called to serve inside them? Absolutely.

He’s drawn to one corner of the kingdom while I’m called toward another.

And yet there is something beautifully centering about our partnership. If we give each other permission, and we release the competition of calendar space and responsibilities, then we find ourselves being anchored by the other’s passions.

I may wander through the city, but church will always be my home.

And he may think and dream and plan and organize within four sanctuary walls, but there will always be a woman he loves calling him toward the streets.

It’s a beautiful partnership—not easy, but beautiful—if we continue to give each other permission to live as He made us.