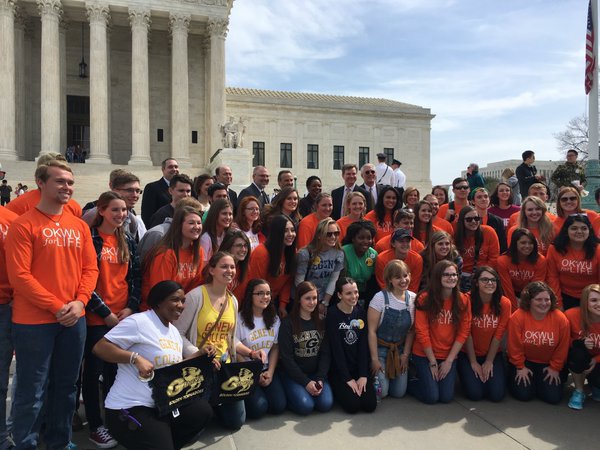 Since the passing of Justice Antonin Scalia, and the possibility of a deadlocked court on key decisions in June, little has been said about what actually happened in this case. But there is hope.

Editor’s note: In the midst of all of the high profile news in our Church about Oklahoma Wesleyan University joining this legal case, there has also been some concern about the outcome in the Supreme Court, especially since the untimely passing of conservative Justice Antonin Scalia, and the strong possibility of a deadlocked court on some key decisions in June. But little has been said about what actually happened when the court heard this case recently. Chelsea Langston’s well-informed article gives hope that there may be an acceptable solution in the offing, and we can continue to pray for that. This article was produced by the Institutional Religious Freedom Alliance, and originated here. We respect and support the Institutional Religious Freedom Alliance, which has been well-aligned with Wesleyan Church concerns.

On March 29, 2016, the U.S. Supreme Court took the unusual action of requesting additional information from the parties in the case involving the Little Sisters of the Poor and other religious nonprofits, ordering both sides to file supplemental briefs proposing acceptable alternatives to the current HHS contraceptives mandate with its disputed “accommodation. Initial supplemental briefs were due April 12 from both parties, and response briefs are due April 20.

According to the court order, the parties must provide information to the court discussing “whether and how contraceptive coverage may be obtained by petitioners’ insurance companies, but in a way that does not require any involvement of petitioners beyond their own decision to provide health insurance without contraceptive coverage to their employees.”

Currently, the HHS mandate requires religious organizations that object, because of their faith, to providing certain forms of contraceptive and abortifacient coverage, to submit a form stating their objection either directly to their healthcare insurance provider, third party administrator, or the government (naming their insurance provider). That form then triggers the provision of contraceptive coverage to the objecting religious nonprofits female employees by the insurer. The Supreme Court’s unusual order for more information directs both sides to discuss “whether contraceptive coverage could be provided to petitioners’ employees, through petitioners’ insurance companies, without any such notice from petitioners.”

The court order welcomes parties to “address other proposals along similar lines, avoiding repetition of discussion from prior briefings.” The fact alone that the court took these rather extraordinary steps to seek alternative proposals than the current scheme should be celebrated. This court order demonstrates that the Supreme Court grasped the seriousness of the current process which, the Little Sisters believe, requires them to violate their deeply held religious tenets. Mark Rienzi, lead attorney for the Becket Fund for Religious Liberty, said, “We look forward to offering alternatives that would protect the Little Sisters’ religious liberty while allowing the government to meet its stated goals.”

In its supplemental brief, the Becket Fund for Religious Liberty, representing the Little Sisters, answered the question of whether the government’s hypothetical example of an alternative would be acceptable with a resounding “yes.” The brief made clear that, if all that was required of religious nonprofits with separate health insurance providers was to select a plan that did not provide contraception that the religious nonprofit objected to, then the insurance companies could separately contact the religious non-profit employees and separately enroll them in a separate plan (with a separate card) that provided them with contraceptive coverage.

The brief goes on to argue that under such a system, the religious nonprofit would not, in fact, be at all forced to come into compliance with the HHS Mandate. Rather, under a truly independent regime that required nothing more than that religious nonprofits contracted for insurance coverage that aligned with their religious beliefs, “employers would not be complying with the mandate at all. They would be exempt from that mandate, and the commercial insurers would be complying with a separate mandate imposed by the federal government.” Moreover, the brief makes clear, as the Little Sisters have made clear in the past that these religious nonprofits are not trying to stop the government from meeting its objectives of providing contraceptive coverage to women: “Petitioners have never raised RFRA objections to truly independent efforts to provide contraceptive coverage to their employees.”

The government’s stated goal in this case is to provide free access to contraceptive coverage for women through the insurance they receive from their employer. Yet, the federal government already provides exemptions from the health law’s HHS Mandate to large secular corporations such as Pepsi, Chevron, Visa, and even the US military. In fact, supporters of women’s reproductive rights should be disappointed with the government’s inconsistent application of its asserted compelling interest to provide women with free contraceptive coverage because a full third of women are not covered by the HHS Mandate. In fact, according to the government’s own numbers, almost one hundred million Americans do not have health care plans that are covered by the HHS Mandate. According to the Becket Fund for Religious Liberty, another major group not covered by the HHS Mandate is uninsured American women, a population who arguably may benefit from free contraceptive coverage the most. The Becket Fund poses: “If instead of trying to force the Little Sisters of the Poor to provide the free mandated services, HHS simply offered them through the healthcare exchange, it could immediately provide the free services to anyone working for the Little Sisters.” Moreover, Becket notes that the government could work toward providing free access to preventative services for many women by making “similar plans available for the 33 million uninsured in all of the above groups in secular exempted plans, and any women in religiously protected plans.”

The government could very well advance its goals of providing access to contraceptive care for women AND protect the religious freedom of faith-based service organizations through a creative alternative solution. The Supreme Court’s unusual steps of asking for additional proposals from both sides seems to suggest as much. So perhaps the Supreme Court’s actions should give both women’s reproductive rights activists and religious freedom advocates reason to hope: hope that the government can devise a more effective system that will provide coverage to the 1/3 of American women who are not covered under the HHS mandate while also providing robust religious freedom protections to the myriad civil society organizations that make up the social safety net of this country.