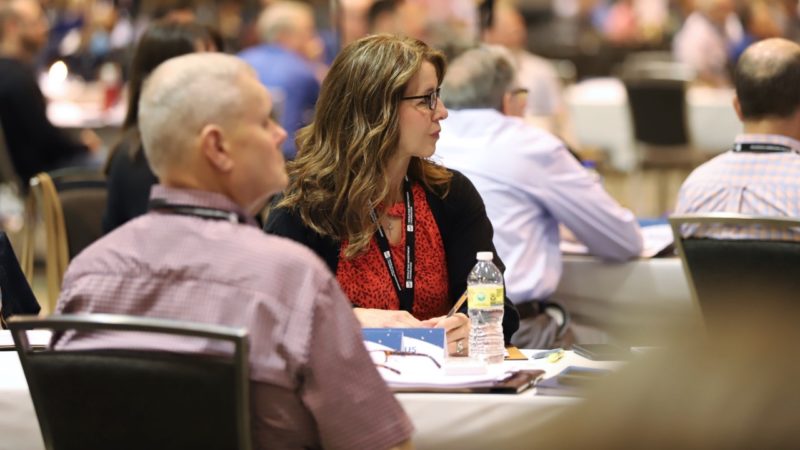 The opening day of General Conference began with prayer. Around the conference hall, delegates and visitors joined in a time of devotional reflection, sharing and prayerfully lifting up the business of the day before the first session began.

Rev. Dr. Mark Wilson, an assistant professor from Southern Wesleyan University, provided the history of the McPherson gavel used to bring order to the 14th General Conference. He reminded us of The Wesleyan Church’s history of standing for truth, love and freedom in the face of opposition as the gavel used was made from a dogwood tree used to hang a vocal critic of slavery, an active layman Micajah McPherson of Freedom’s Hill Wesleyan Church.

Dr. Schmidt gave the State of the Church address. He began by acknowledging the need for the sanctifying work of the Holy Spirit in our lives, openly spoke of the difficult statistical realities of the past 10 years and the anxiousness in this season due to the many losses within our families and churches. He reminded the church that we need the Spirit to be with us in our praying and conferencing as we seek God to “help us to be a Spirit-empowered, Unleashed movement” again. Dr. Schmidt finished by calling the church to a future of “Continuity … in courageous pursuit of the mission.”

The remainder of Monday’s business involved General Superintendent and general officer elections as well as gracious discussion and voting on various memorials brought before the General Conference. Results of elections and the day’s memorials are listed below.

The conference day concluded with Wesleyans sharing food and conversations at tables and receptions across the America Center and St. Louis.

At the rise of the General Conference, the executive cabinet at Wesleyan World Headquarters will consist of the following people:

Memorial 387: Including Wesley Seminary in “The Discipline:” Approved.

Memorial 52: Constitution: Amendment Regarding Gifts of the Spirit: Approved with amendment.