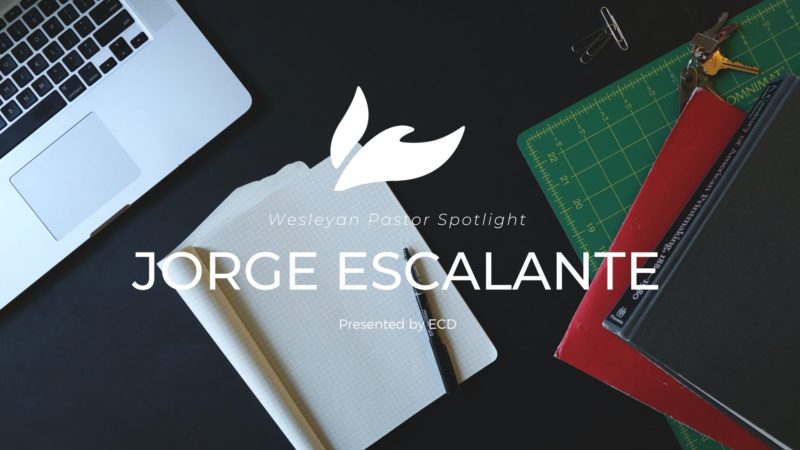 The hyphen: integrating the immigrant into ministry

The hyphen: integrating the immigrant into ministry

Rev. Jorge Escalante lives in Indianapolis, about 2,000 miles from his birthplace – Tijuana, Mexico. But, he’s hardly alone. Trinity Church, where he serves as a pastor, is a welcome place for immigrants, in part thanks to the Hispanic ministry he leads.

Escalante and his wife, Rev. Zulema Escalante, were both ordained through The Wesleyan Church’s FLAME program, and began pastoring at Trinity two years ago.

Many American churches live next door to Hispanic communities that they are not serving, Escalante pointed out.

“There’s a thirst for God in the Hispanic community,” he explained. “As immigrants, we come from another country and we leave all of our traditions, culture and religion behind. We feel homesick. As the church, we need to fill in that gap.”

In Indianapolis, Escalante has seen a phenomenon common in immigrant communities across the country.

“There are a good number of second generation Hispanics here in Indy that stopped going to church once they got older,” he explained, referring to Hispanics who were born in the U.S. to immigrant parents.

Escalante said the children of immigrants have trouble fitting into their parents’ churches. “They were confronted with the first generation Hispanic church, and they’re not used to it, the style.”

“They don’t feel 100 percent American, but they don’t fit into the first generation Hispanic community. They’re the hyphen,” he said.

Trinity’s mission is to reach “the hyphen,” and Escalante said it’s still a work in progress. Two years into the ministry, 75 percent of the Hispanics attending Trinity are first generation.

“We are still studying how we can serve that demographic, (the second generation),” he said.

Trinity has a vision to integrate all people into the church body, whether Mexican or Burmese – another large immigrant community in the area.

“We all worship together, listen to the same message. There’s no separate classrooms for the Hispanics and Anglos.”

To help all participate, Trinity offers live translation and incorporates Spanish-language songs and Scripture reading in the services.

“The community sees an acceptance, an integration,” Escalante said.

However, he has still faced challenges convincing Hispanics that Trinity is a place where they will belong, as the church continues to strive toward its mission of becoming more multicultural.

Some of the first generation immigrants who walk through Trinity’s doors “expecting a Latino experience” are disappointed, Escalante said.

“People expect to see 50-50 and they don’t see that yet. We’re just getting started. It’s a challenge to keep as many families in the church as come through the ministry.”

He also said newcomers are surprised when they don’t see him onstage preaching on any given Sunday, despite his pastor title.

“In the Hispanic community, people see the pastor as the person leading the church,” Escalante said, adding that it can be challenging to explain to Hispanics that each pastor has a different role at Trinity.

Nevertheless, Trinity sees growth, and others in Indianapolis are catching onto the vision. Escalante said Trinity partners with other churches in the area to foster multicultural ministries and compare notes on what’s worked and what hasn’t.

“I hope to see an awakening of our minds, meaning for us to see that we don’t need to be separated in the church,” Escalante said.

“When we go to work, school, theater or really anywhere, we’re with people of all kinds of ethnicities. Why do we need to be segregated at church?” he asked.

While language and cultural barriers can present challenges, Escalante said he’s seen a vision of the kingdom of heaven at Trinity.

“There is a different feel when all the language groups worship together. The Bible says heaven will be that way,” he said. “I think we can experience that here on earth, here in Indy.”