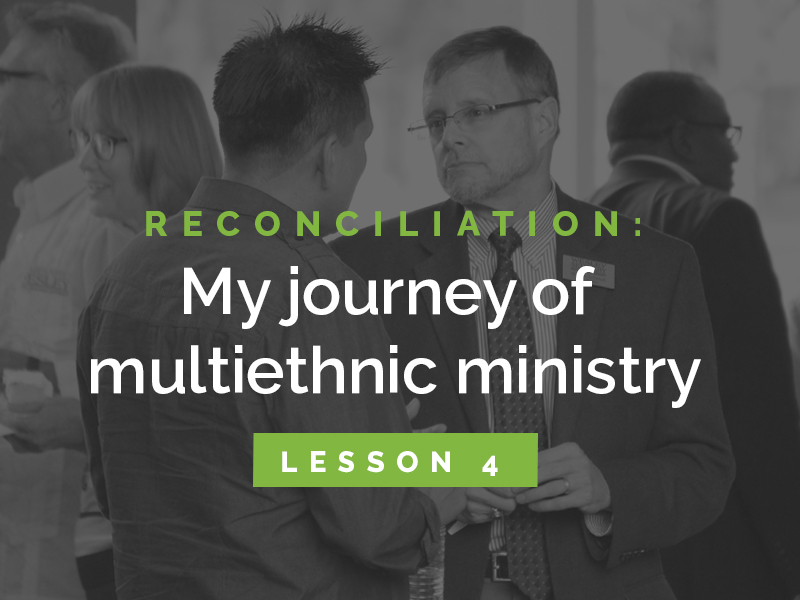 My privileges meant a head start and not dealing with barriers and challenges people of color must persevere through almost daily.

Charles Montgomery and his family decided to join Kentwood Community Church (KCC) in Grand Rapids, Michigan, in the most intentional way. Among few African Americans at KCC (less than one percent), his spiritual depth and relational capacity led to him becoming lay leader of our congregation. He coached me on “crucial conversations” and conflict resolution, helped me to steward my influence in positioning others and comforted me well as I grieved when God called us away from KCC.

Kim Gladden is well known as director of Discipleship for The Wesleyan Church. I have admired her for years and, in an accreditation process for Wesley Seminary, she was appointed by an accreditation agency to be a member of the team. She shared such great insights into graduate ministry education and in actualizing our desire to be a multiethnic seminary. She models “a person of peace with prophetic insight” and leads the way in holistic discipleship.

Privileges and positions are to be stewarded and leveraged

I first thought deeply about the dynamics of “power” in early 1990s when a course in “Power, Change & Conflict Management” became the focus of my doctoral work. Years later, I would teach on it, write about it and be mentored in it. Bob Woudstra, who later would become the CEO of Farmers’ Insurance, was a member of our church who modeled humility for me.  He coached me in understanding “power seat” dynamics — that as lead pastor, someone sat in that power seat before me and would after me, and I would only keep it warm and hopefully steward it well for a time.

Even though I had a framework for understanding the dynamics of power, privilege and position, I had not integrated it into my own personal journey of racial reconciliation or into my pastoral responsibility. When the concept of “white” privilege was introduced to me, I could feel myself somewhat awkwardly progressing (or getting stuck) in the change process I had studied years earlier – denial, resistance, exploration and commitment.

My initial feelings and reactions could not be fully trusted and had to be fully tested. My denial and then resistance triggered my tendencies toward feeling condemnation, shame and defensive pride. In my quiet times with the Lord, I had to ask questions like: Is pride preventing me from recognizing the privileges I have? In what ways would the Thief seek to block the abundance Jesus wants to create (John 10:10)? In what ways can my privileges be stewarded/leveraged?

My privileges meant a head start and not dealing with barriers and challenges people of color must persevere through almost daily. They are a blessing I did not earn and could not have earned. They don’t mean, however, that I did not have to work to accomplish some things. Reflecting on my life of privileges and perseverance feels like the tension between salvation being totally given by God’s grace yet working it out with fear and trembling.

Biblical mentors for me have been people like Esther (Esther 4:12-14) and Moses (Hebrews 11:24-27). Moses’ first instinct was to deal with oppression and injustice individually and violently, whereas Esther approached it prayerfully, courageously and systemically.

While at KCC I partnered with Charles Montgomery, who as lay leader walked alongside me as I served as lead pastor. He modeled how to “speak the truth in love” and helped me to see systemic issues and injustice that my long-term position and privilege had caused me to miss.

Later during the accreditation process at Wesley Seminary, Kim Gladden helped me and others see how positions (administrative, faculty, etc.) provided certain privileges that we were then responsible to steward and leverage so our desire to be a multiethnic seminary might be realized.

I have so much yet to learn. Author Andy Crouch recently provided glimpses into leveraging privilege and position to increase authority of all. He observed, “The goal of police power is flourishing — actually increasing the capacity for meaningful action in the community. In a community with effective policing, more people have more authority.” While abuses of power and systemic racism in police departments is deeply concerning and a cause for action, I’ve been grateful to talk with Wesleyan police officers seeking to shine the light of Jesus through their service. Talking with them reminded of Mike Geerlings, a policeman in KCC who was so insightful and invested in our multiethnic journey.

Currently, The Wesleyan Church’s (TWC) key priority is to become a Kingdom Force — multigenerational, multiethnic, multieconomic, women and men, lay and clergy, everywhere to everywhere. TWC’s executive cabinet members and district superintendents are seeking to steward our positions to create opportunities for the new Kingdom Force of leadership the Holy Spirit is raising up.

We are learning and seeking to live this reality articulated by Tom Steffen, “… power is always on loan … within the spiritual domain, shared power results in multiplied power, expanding God’s kingdom.”

“Salvation and glory and power belong to our God, for true and just are his judgments” (Revelation 19:1-2, TNIV).