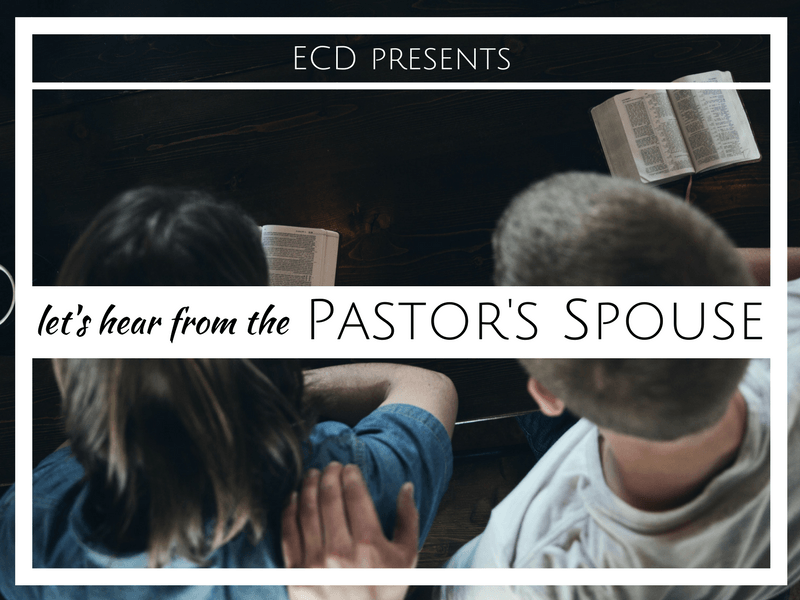 She said, he said: handing the mic to pastors’ spouses

While pastors’ spouses are as much in the spotlight as their partners, they’re less often handed a live microphone and an empty stage. We wanted to find out what pastor’s spouses – both pastors’ husbands and pastors’ wives – had to say about life in

While pastors’ spouses are as much in the spotlight as their partners, they’re less often handed a live microphone and an empty stage. We wanted to find out what pastor’s spouses – both pastors’ husbands and pastors’ wives – had to say about life in a ministry-centered family, so we gave the mic to Shannon Bradford and Jason Colburn for a Q&A.

Shannon, who lives in Wheaton, Illinois, is the children’s director at One Church Wheaton, where her husband serves as lead pastor. She’s also the event coordinator for Wheaton College’s Admissions. She and her husband Brian have three children— aged 3, 8 and 11.

Jason lives in Lehigh Valley, Pennsylvania. He works in information technology representing Dell, and also serves as worship and arts pastor at Trinity Wesleyan Church, where his wife Gina is lead pastor. They have four children – aged 18, 20, 21 and 22.

What’s a box you sometimes feel put in as a pastors’ spouse?

Shannon: Pastors’ spouses are seen as a superhuman – that they can do everything, they’re perfect and they don’t have feelings. But she’s a human, she gets tired, she makes mistakes, she has feelings that get hurt, she needs friends. People forget that the spouse feels the brunt of what’s going on. The pastor’s spouse knows all the goings on, the good, the bad and the ugly. It’s hard for me when people are being critical of my husband, but then when they see me, they act like we’re best friends.

Jason: A box we get put in is that the vision and mission is just the pastor’s, not the pastor’s family’s. But, we both get it, we both have a passion and a vision. More than that, I can fully buy the vision and carry it out in ways that she can’t. For example, Gina comes up with great big picture visions, like reaching 1 percent of our valley, about 1 million people. That’s where I can jump in and provide social media outreach, building the messaging via publications.

How has your gender affected your experience as a pastor’s spouse?

Jason: Typically once we get past the initial, “Oh, your wife is a pastor?” it can lead to some wonderful conversations. Interestingly, I have learned to generally anticipate the reaction. If my conversation is with a “churched” individual, the more steeped in tradition, the colder the response. This doesn’t bother me. I’m not trying to change their minds. What has been truly rewarding is the conversations I have had with de-churched or unchurched individuals who have responded with some great questions that have led to opening doors to check out a church that would hire a female pastor.

Shannon:  At first glance, I think, I don’t really think it has affected me.  But as I think about it, I think of the stereotype of how the pastor’s wife has to fill in all the positions that aren’t filled. I ran the kid’s ministry at our last church for two years.  It wasn’t the best fit for me, but I did it. When we interviewed for our current church, I said in our interview, “I do not want to do kid’s ministry!” Guess what I’m doing? Kids ministry, because there’s no one else to do it. I also have spoken a couple of times on a Sunday morning, once when my husband was out of town.  He told me upon his return that he got a text during the service blasting him for having a woman speak.

What’s essential to thriving alongside a pastor?

Jason: The hardest thing is not going to our nature to protect [our spouses]. There’s a time for that, but it’s not the same time as it might be for a normal husband or wife. You have to show a lot of restraint and realize that God is the protector. For example, there was a pastor in the community who felt he was being wronged by Gina and Trinity. His approach to a meeting was bully-ish. The conversation got very personal; it should never have gone down like that between two followers of Christ. I wanted to jump in and put an end to it. I wanted to defend my wife. But through that confrontation, it established her. My wife is a very strong woman and didn’t need me to step in at the moment.

Shannon: It’s important to take time for your marriage. If your marriage is good, you can handle everything else. Also, self-care. The more I’ve been in ministry, I’ve realized I’m in charge of caring for myself. At times I’ve been bitter about missing out on church worship or certain small groups, but I’ve realized I’m responsible for my own walk with the Lord.

What’s one of the most positive experiences you’ve had with a congregation, when you felt honored, known and loved?

Jason: One of the most difficult things for me about making [the move to Pennsylvania] was finding something in the community that both met our needs financially and was also meaningful work. In that transition jobwise, people at the church were so kind. People were sending me all kinds of job openings, all out of care for us. And, the way they love on our kids is as meaningful as anything could be. When people love and take care of what you love, it creates a bond.

Shannon: At our previous church in Texas, I was the children’s director. We were going to do VBS, but I asked, how can we meet a need in our community using our strengths? [In our congregation,] we had all these teachers off in the summer. I found resources on the Wesleyan webpage to develop an educational program called LeapFrog. It was more educational than Bible-based. When I pitched the idea, I was nervous that people wouldn’t accept it. But that church trusted me, they got on board and tried it out. We were able to bring new families into the church [through the program]. I felt that congregation respected me, allowed me to try new things and encouraged me through the process.

What practical encouragement would you give other pastors’ spouses?

Shannon: [As a newlywed,] I started meeting with 10 other pastors’ spouses and realized they were all so different, in terms of church involvement and personality. My advice is to be yourself, to know who that is. If you know who you are and what you’re good at, then you’ll thrive. People can see that and respect you for that. Don’t try to fit any mold.

Jason: Empower yourself! Just go, do it! Get out in the community, embrace the mission. You don’t have to wait to be asked.