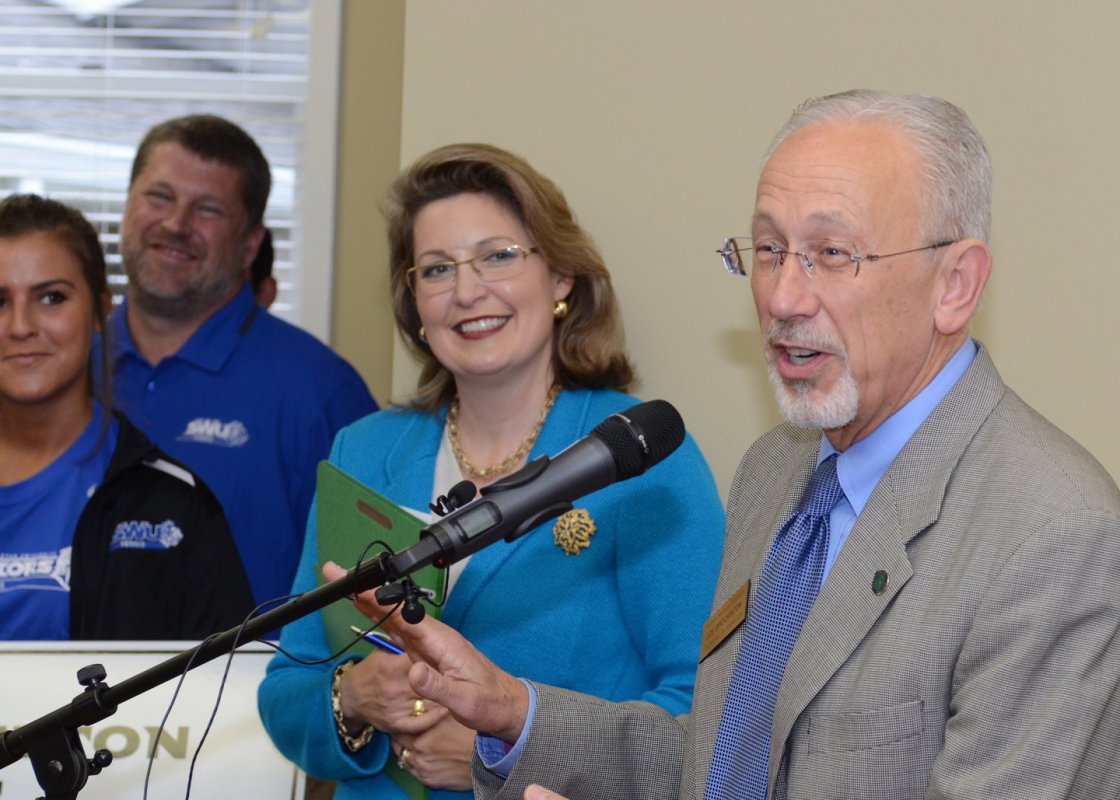 The new tennis facility at Southern Wesleyan University was dedicated October 28 with a ceremony inside the Nicholson-Mitchell Christian Ministry Center, overlooking the tennis complex.

The university then faced the challenge of building a program without the facilities essential for intercollegiate competition. That’s all about to change as construction of their new tennis complex progresses.

The facility was dedicated October 28 with a ceremony inside the Nicholson-Mitchell Christian Ministry Center, overlooking the tennis complex.

The facility was named for Rev. Leroy C. Cox, a SWU alumnus who served numerous Wesleyan congregations and recently passed away. His family’s generous support is helping to make the new facility possible. Dr. Thomas Cox honored the memory of his father, Rev. Cox, by gifting to the university in this meaningful and lasting way.

Dr. Cox, a pediatric dentist and SWU alumnus, shared about how his father was known for his friendliness and optimism.

“He would pick out the positive things about others,” Thomas said, adding that there was a balance to his father’s optimism. He recalled telling his father that he pitched a shutout and hit two home runs at a baseball game, to which Leroy responded “that’s great son. I’m so proud of you,” and then quoted Scripture to his son, “But let he that thinketh he stand take heed lest he fall” (1 Corinthians 10:12). Thomas reflected on how that verse helped him in the midst of dental school.

SWU President Todd Voss said the tennis complex will benefit not only the tennis teams but also students and tennis enthusiasts in the surrounding community. He added that building a tennis complex also follows through on a NCAA recommendation as the university continues in its membership process as a new conference member.

Two tennis courts within the complex were named–one in honor of Tim Newton, an avid tennis player who grew up at the Central campus and whose family has close ties to the university; the other court was named in honor of Dr. Joe Brockinton, SWU’s vice president for student life.

SWU Tennis Coach Darrell Jernigan said he now has a platform for a Christian witness. He praised members of his team who come from several states as well as from South America and Africa and the ministry that’s taking place within the tennis program.

Pictured: Dr. Joe Brockinton, right, SWU vice president for student life, was pleasantly surprised when the university named one of the complex’s courts in his honor as a result of his love for tennis, support for SWU athletics and financial support of the complex campaign. 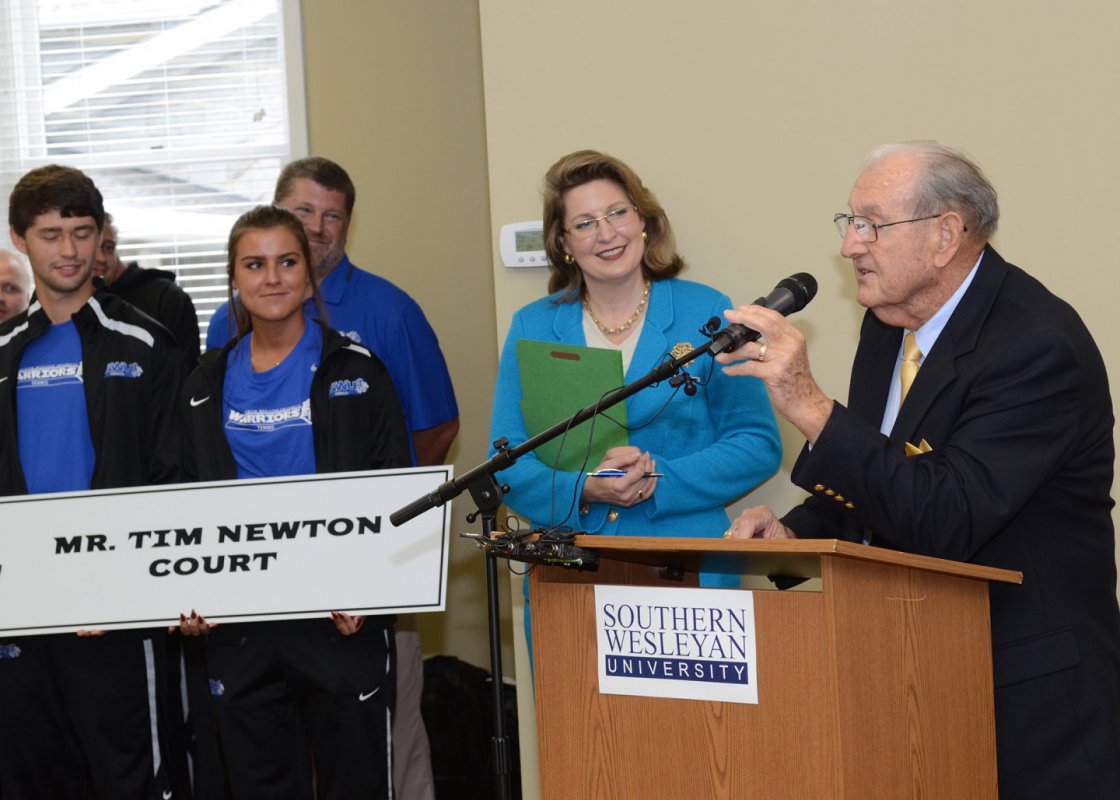 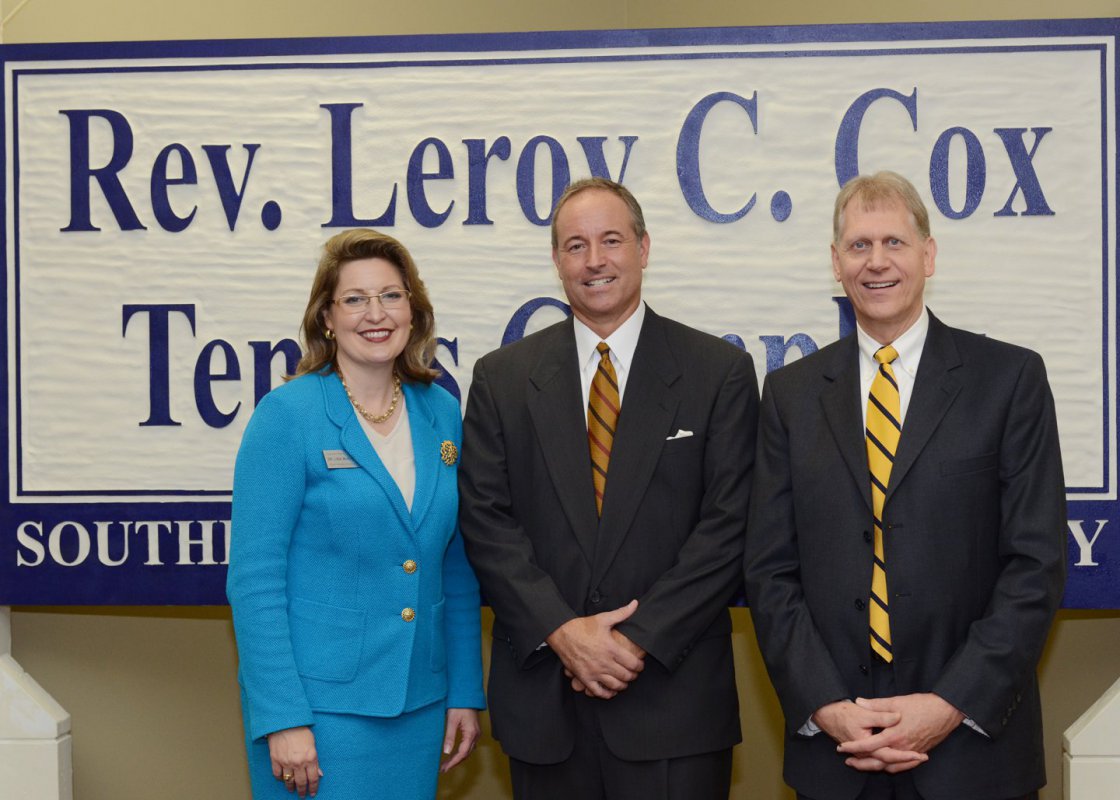