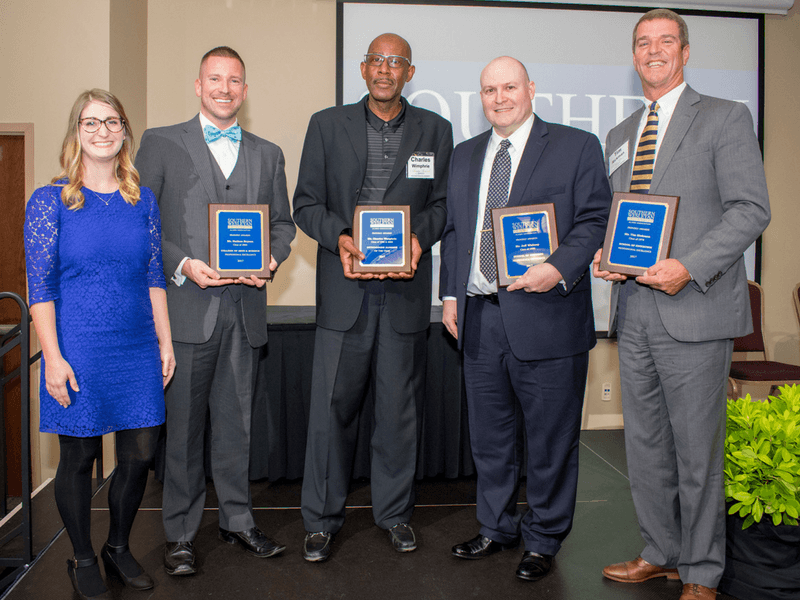 The five alumni from Southern Wesleyan University have engaged in various capacities of service through the years.

A 1982 physical education graduate, Wimphrie was an outstanding student-athlete when he competed on Southern Wesleyan’s men’s basketball team. After graduating, Wimphrie served the university in a variety of roles, but is best known for his more than three decades as head men’s basketball coach. In addition to coaching the Warriors, Wimphrie has taught thousands of children the fundamentals of the game at numerous basketball camps. Over the years, Wimphrie has touched the lives of doctors, lawyers, teachers, preachers and several professional athletes. He recently received another honor when the basketball court in Tysinger Gymnasium–where he has both played and coached–was named in his honor.

A 2010 English education graduate, Jolly has been actively involved in church plants in the Charleston area, part of the South Carolina District of The Wesleyan Church, with her husband Nathan. Prior to Charleston, the Jollys spent two years of missionary service overseas through Global Partners of The Wesleyan Church. She and Nathan have been part of Residuum, a church serving the Charleston area, and more recently have worked to begin The Grove, a new church plant in the Mount Pleasant area. She is currently working on her master’s degree through Indiana Wesleyan University as she prepares to become an ordained minister in The Wesleyan Church.

A 1979 Education graduate, Rickman is a longtime school administrator who has made a lasting impression on more than 20 classes that have graduated from Wesleyan Christian Academy in High Point, N.C. He can be seen at practically all school functions, including sporting events, fine arts performances and banquets. Rickman has taken students on 20 mission trips to Jamaica and played a significant role in Wesleyan’s growth, while demonstrating a “deep love” for his students. During Rickman’s leadership, Wesleyan has experienced a 100 percent graduation rate, expansion of AP (Advanced Placement) courses into all core disciplines and expansion of the fine arts program. He’s also the 2017 recipient of a professional lifetime education certificate from the Association of Christian Schools International.

Whitney, a 1990 accounting graduate, has been serving as the financial director of Global Partners at The Wesleyan Church Headquarters since 2013. He has a wealth of experience gained from serving in Russia and across Europe. As a Southern Wesleyan student, Whitney was involved in Rotaract, part of Rotary, an international service organization, becoming director of the Rotary Youth Leadership Camp for their North Carolina West District. As a student, he traveled to Russia for two summers as part of the university’s Russia Youth Camp. He would go on to serve 18 years in Russia while assisting mission fields in the areas of accounting and bookkeeping and becoming part of the European Area Leadership Team.

Also, Dr. Todd Voss, president of Southern Wesleyan, announced the launching of a campaign to endow a $25,000 scholarship in Wimphrie’s name to carry on the coach’s legacy by assisting future students with a Christ-centered higher education degree. Voss added that Southern Wesleyan University Athletics is providing a lead gift of $4,000.