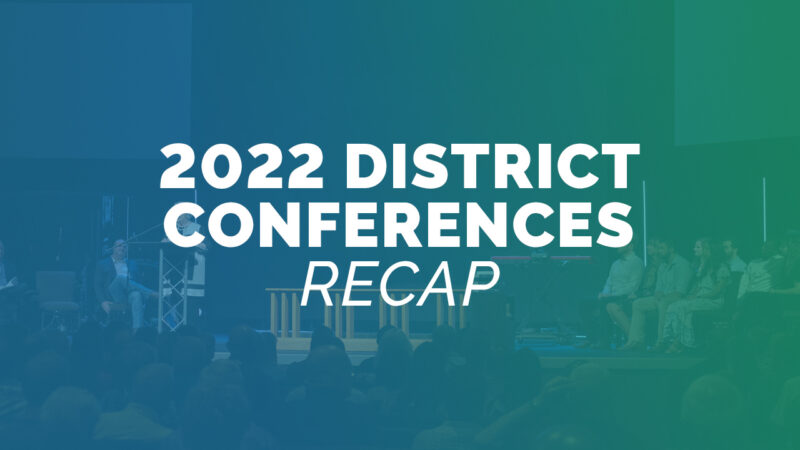 The Wesleyan Church's North American Conference season has been full and fruitful in a variety of ways.

Nearly 4,500 delegates, lay and clergy, cast votes at General Conference and the 23 subsequent district conferences; peer-elected delegates empowered to govern The Wesleyan Church (TWC). I love being part of this annual assembly of lay and clergy leaders, seeing the various parts of our body honoring Christ through their ministries — work and church. I love the shared responsibility we all have in fulfilling God’s mission through TWC.

Each district conference evidenced positive momentum coming out of General Conference, having declared there, “… our deep commitment to our core mission of evangelizing the lost, discipling believers, equipping the Church, and ministering to society …” and “… to proclaim, defend, and hold each other accountable for the historic and orthodox doctrinal positions of The Wesleyan Church ….” We are moving forward, leaning into God’s call for us.

Our 2022 ordinands were significant in number and truly a Kingdom Force of women and men, of representing multiple generations and ethnicities — two districts alone ordained nearly 40!  Districts witnessing their ordinands’ obedience to God’s call and praying over them is always a holy experience.

Membership Commitments has met the required two-thirds aggregate vote of the delegates to the North American District Conferences and will be incorporated into “The Discipline of The Wesleyan Church 2022,” scheduled to be released in November.

It has been a full and fruitful conference season. Wesleyan family, you conferenced together very well and, by honoring one another, glorified our God.

Thank you for praying continuously and serving courageously!

Click here to read more on retiring and newly elected district leadership as well as the Northwest District merger.

Dr. Wayne Schmidt is General Superintendent of The Wesleyan Church.